FBG ads and notices state the firm built either six or seven buildings for lock and hardware maker Yale & Towne in Stamford, CT. Frank Gilbreth was friends with Henry Towne, the President of Yale & Towne, a collaboration that would extend into his management consulting years. (Linus Yale, the original inventor of the tumbler lock, died before the company reached its earliest success.)

Five buildings are documented. While a sixth is possible, the “seventh” may be a promotional miscount. However, the Y&T facility in Stamford eventually covered 22 acres and comprised some 55 buildings, and the information on the FBG jobs has so far been too incomplete to pinpoint the buildings. There is considerable room for investigation of company records and history to fill in the gaps, and possibly identify FBG buildings still standing at the site.

The Stamford works was scaled down beginning in the 1930s and finally abandoned to other companies in about 1950. A good number of the major buildings are still standing and have been converted to condo and multi-use in recent years. 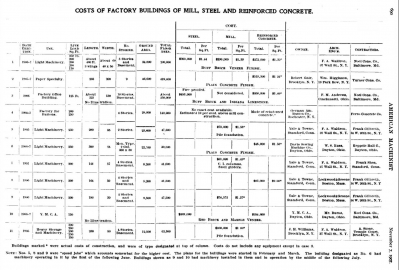