One of the nine projects in San Francisco following the earthquake and fire of 14 Apr 1906, this was three multistory buildings for city merchant Henry Sonntag.

The first reference, from the 24 Jun 1906 SF Call, specifies three reinforced concrete buildings (and misspells the name of the principal, a fairly well-known property owner and manager in the city, as 'Sontag.') As the only known remaining building is of brick construction, it may be that cost or labor troubles with the concrete workers led to a change of construction plans.

The Call for August 8, 1906 says that Sonntag has leased the “three story and basement building on the northwest corner of Sansome and Jackson.” This building, 701 Sansome St, appears to be original, and there are calls for laborers at this address.

A reference in the same issue notes Sonntag leasing a building of similar description at “the northwest corner of Front and Oregon, now in course of construction.” This was likely an identical building, but Oregon Street no longer exists and the area (of the terminal loop of Front Street between Washington and Jackson) has been completely rebuilt. (What remains of Oregon Street would be the tiny end crossing of that traffic loop.)

The location of the third building has not been determined. However, a 28 Jul 1906 notice in the Call says Sonntag and George Toy will be commencing work on a 6-story-with-basement office building at the corner of Powell and Geary Streets. Both Sonntag and Toy were fixtures in the commercial real estate field at the time and this could be another building, contract and builder. 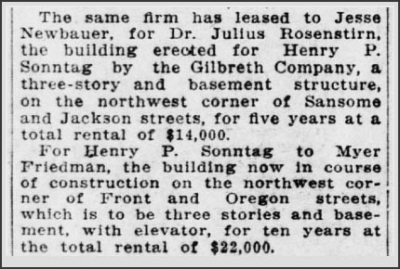