This project has one of the most unusual histories of any in this list. It was FBG's only Midwest project (excluding one each in outliers Ohio and Michigan), and it involved parallel construction of two large buildings and a smaller third one, for two companies. All three buildings still stand (as a combined structure), are still in use and are on the roster of National Register of Historic Places as well.

This project history is both multi-faceted and copiously documented. To keep the material manageable and maintain this main entry's focus on the actual FBG construction, the additional aspects have been broken out into several sub-entries.

This job is known from the listing in the FBG advertisement in the 1909 Sweet's Catalogue, although the the entire effort disappears into “Simmons Hardware Co., Sioux City, Iowa,” which does not begin to cover all the bases. Fortunately, despite little mention by FBG or any of his biographers, newspaper coverage was substantial, and the 2008 NRHP report adds considerable detail… but oddly enough, not the whole story of this curious project and not without a number of factual lapses.

Simmons Hardware was a major retailer of hardware and home goods, including their popular premium brand “Keen Kutter” tools and cutlery. Based in St. Louis, MO, they had both manufacturing sites and large regional warehouses in six states across the northeastern US. Although this building is most often referred to as a warehouse, it may well have also been a factory for some of Simmons' products. They were one of the first firms to use a large distributed warehouse chain, following the lead of Montgomery Ward and Sears-Roebuck, to offer a vast selection of products with fairly fast, inexpensive shipping. (No, Amazon didn't invent the model!)

In another parallel with the Amazon era, Simmons apparently solicited the best overall deal for siting each of its new regional warehouses (they would eventually have eight), and Sioux City seems to have edged out Salt Lake City in 1905.

For reasons that are not clear, Simmons apparently partnered in the Sioux City project with a regional produce distributor, Haley & Lang Produce Co (or Fruit Co). Although the terms of ownership and partnership are unclear (both are listed as contracting with FBG), The two companies worked together to build adjoining buildings at the somewhat tangled intersection of 3rd, 4th and Water Streets, an area cut through with a winding creek. The project involved considerable city involvement to permit channeling of the creek to allow more building space without flooding. Late in the actual construction, Haley & Lang added a small, one-story office to the front of their building, built over the former creek bed.

The soft terrain required the driving of some 1,900 concrete piles cast and driven by FBG subsidiary CCPCoA. The building was one of the first outside the northeast to use concrete piles. A local newspaper article discussed the coming of this construction innovation to the Midwest.

That the two companies had largely independent plans and buildings seems to have confused some era reporters, who sometimes refer to separate companies and buildings or refer to the whole project as being for Simmons, as in when they note that H&L was installing a refrigeration plant and cooled rooms “in the new Simmons Hardware building.”

It is not entirely clear how separate the buildings were at the time of initial construction, but the alleyway between them was, cleverly, a dead-end rail spur. By the time Dymond-Simmons took over the whole building, or within some short time thereafter, the entire alleyway was enclosed. The enclosure was two stories high, and upper floors crossed over between the formerly separate buildings. A walled corridor connected the two sides on the rail/ground floor, at the end of the spur. The building has been measured at over 130,000 square feet, about 125,000 of it “usable,” and nearly 160,000 square feet counting the basement.

With several running changes of height, details and layout, the building was finished in mid-1906. The larger Simmons portion of the project, to the east, was a four-story warehouse with a tall corner clock tower. The Haley & Lang portion of the building was also four floors, at least two of which were to be refrigerated and, if contemporary reports are correct, had the equipment installed. An angular one-story office was added to the front of the H&L portion while construction was approaching completion. When the building was complete, Haley & Lang declined to pursue their lease on the new building—which perhaps indicates they were not financial partners in the construction—and eventually built a new building a few blocks away.

The FBG org chart of Aug 1905 lists Gordon, Tracy & Swartwout as the architects for Job A-11, Sioux City IA.

Construction of the Simmons building was hampered by the remaining lease on a hotel occupying the northwestern corner of the site. The owner, Fritz Rentschler, refused all offers of buyout and relocation and for a time it looked as if the Simmons portion of the building would have to be built in two stages, the southern half on the original schedule and the rest when Rentschler's lease expired well in 1906. The hotelier was eventually convinced to abandon his lease and hotel, and the Simmons building was constructed more or less on original schedule.

With both major buildings well towards completion, Haley & Lang decided to extend their portion with an angled, one-story office at the northwestern corner, where the creek had formerly run.

A corner tower, often with clock faces, was a hallmark of the Simmons buildings in other locations. This project included a tower to stand one tall story above the rest of the building in the northeast corner, and it was built and finished with a decorative top before a late decision added another extended “story,” much more elaborate and larger than the tower below. The clock faces carried the company motto in unusual fashion.

As construction resumed in early spring after a hard winter break, Simmons apparently sold the local business to a partner or subsidiary firm, with the new location becoming Dymond-Simmons. That name would be the first painted across the north facade.

As the building was approaching completion in June 1906, Haley & Lang became dissatisfied with the lease terms and possibly the new structure of the local company, and pulled out of the project. They would never occupy the warehouse or office.

A substantial amount of local news coverage of the project focuses on several industrial accidents for which both Simmons and FBG were sued. Three appear to be injuries, but the fourth was a gruesome death. All landed Simmons and FBG in court as families and survivors sued.

With the loss of Haley & Lang, other tenants briefly occupied the unused space. Dymond-Simmons took it over fairly quickly, and used the building until the company dissolved about 1932. After that, a succession of tenants occupied the entire building with intervals of it remaining empty. The building had stood empty for about twenty years when was declared a historic place in 2008. It was converted in 2013-14, a bit improbably, to a Hard Rock Hotel and Cafe that is still in operation. 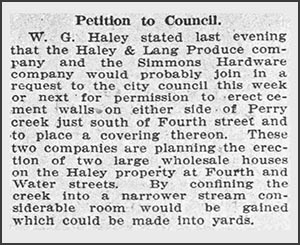 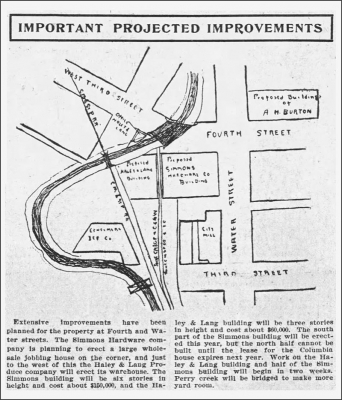 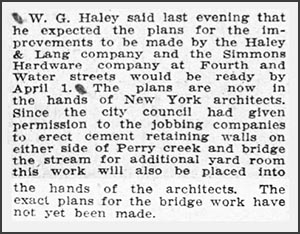 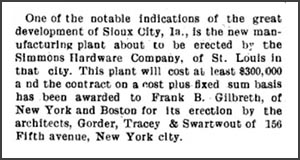 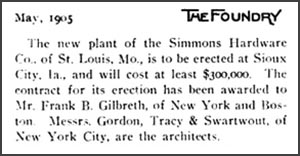 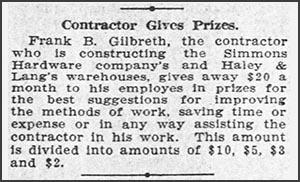 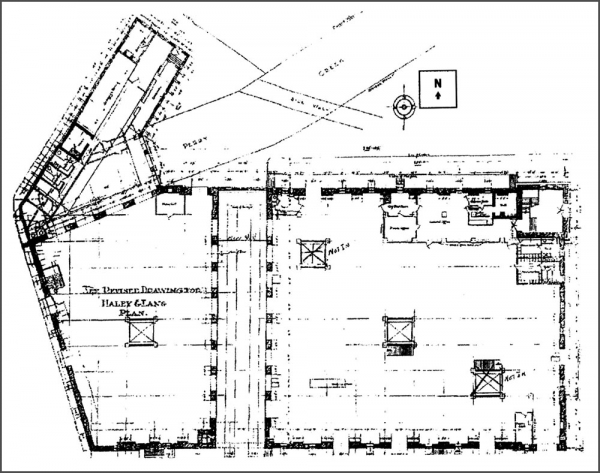 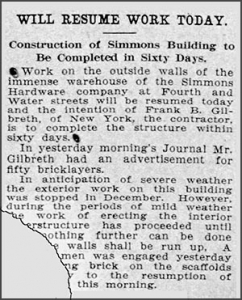 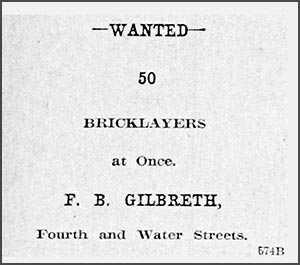 Thanks to Thomas Munson of the Sioux City Public Musem for locating photos that showed the odd clock face arrangement.