A brief newspaper notice stated in early 1906 that FBG was the defendant on four liability suits during the construction of the Simmons Building. Two were injuries, for which some record was found. A third, probably another minor injury, is known only from a couple of court schedules. The fourth was a major injury and death suit which had considerable newspaper coverage.

This entire side story is worth some detailed coverage, as there are very few reports on what were surely common occurrences on era construction projects, for FBG and others. Many reports across these years are no more than a filler: “John Q. Laborer, an Irish worker on the new Blank Building, yesterday lost an arm to a railway mishap.” — and nothing more. These relatively detailed examples are thus rare and useful in evaluating the larger picture of Frank Gilbreth as a contractor and businessman.

All notices and references except one are from the Sioux City Journal, 1905-1907.

There are two brief court-docket listings for a Christenson vs. Gilbreth. No further details were found.

Taylor vs. Gilbreth is known from one clipping, which is mildly ironic for the plaintiff's name, and for the comment at the end that “he had not been given the proper instructions for making the work easy.” No resolution was found. 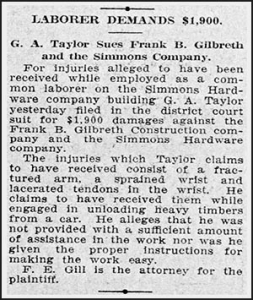 There are two clippings for Huebner vs. Gilbreth, including a resolution. 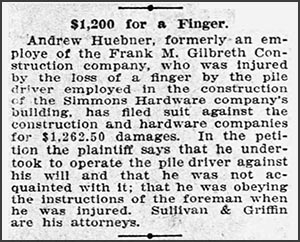 The most serious incident, protracted legal battle and complete newspaper coverage is for Usher vs. Gilbreth for a site death involving the failure of a derrick under load. 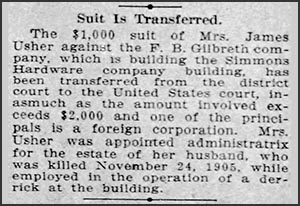 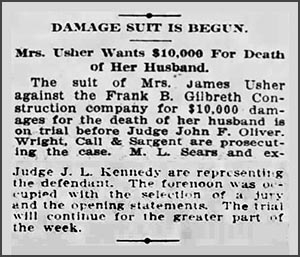 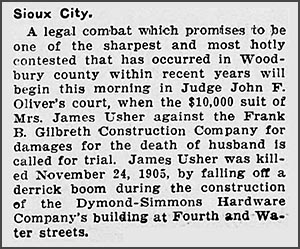 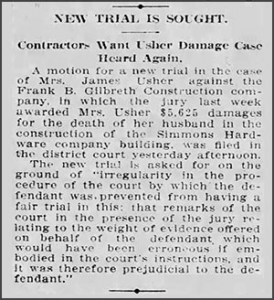 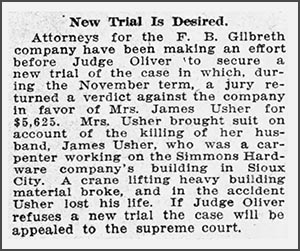 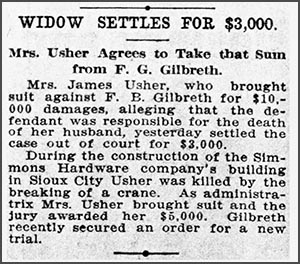