This project was two mercantile/office buildings, part of an upgrade to the mill town from frame construction to rather grand concrete and brick replacements. They stand about 200 feet apart along Congress Street.

Both buildings were added to the National Register of Historic Places in 1980.

The Strathglass Building at 33 Hartford Street was originally built at three stories, with cast columns and a very grand Beaux Arts design. It was extended with an imposing overhanging fourth story after a fire and subsequent conversion to the Hotel Harris in 1931.

The two-story Rumford Falls Power Company Building at 49 Congress Street was built at the same time, another very grand Beaux Arts building. At some point, it was stripped of its elaborate cornice. 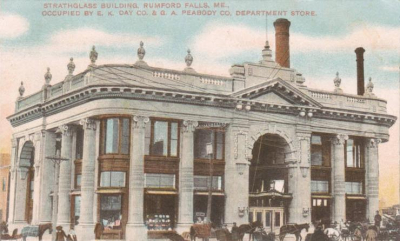 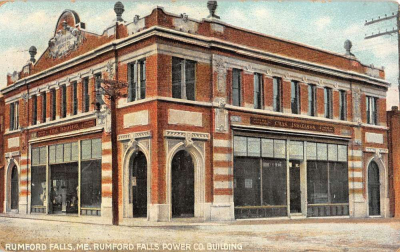 My mother in law grew up in Rumford and knew these buildings well.