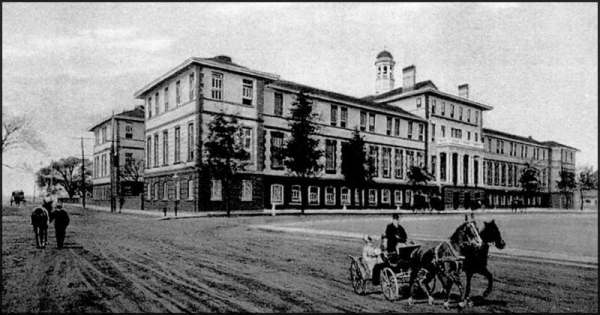 One job known from the listing in the FBG advertisement in the 1909 Sweet's Catalogue, this project for the City of Charleston, South Carolina would lead to the most protracted legal action in which FBG would ever be involved, not resolved for seven full years. What should have been a crown-jewel project bringing great prestige and more major jobs in the South turned into a millstone erased from both parties' histories.

The full story behind this project quite long and interesting, but involves no fewer than five Charleston city hospitals across the years. Put briefly: in 1856, the city hospital largely responsible for the poor and nonwhite was City Hospital, an aging horror built before the Revolutionary War as a workhouse/prison for slaves. That year, a bequest led to the building of the first Roper Hospital in the same block.

The rare East Coast earthquake of 1886 led to the demolition of City Hospital and the conversion of what was salvageable of Roper Hospital into apartments, in part because its operators, the Medical Society of South Carolina (MSSC), did not have adequate funds to rebuild it. The city hastily built a new facility at Lucas and Calhoun Streets (now Barre and Calhoun), Memorial Hospital.

In 1905, Memorial Hospital was judged hopelessly outdated and in need of replacement. The city, in cooperation with MSSC, decided to demolish Memorial and build a new, modern replacement on the same site. The city's contribution was largely the land, site and grant of operation to MSSC; MSSC, on the other hand, brought the trust fund that had built the original Roper Hospital, now some $150,000. To ensure the society would have funds to operate the new hospital, the city set the budget at $100,000. The architect was Charleston native son and former Supervising Architect of the US Treasury W.M. Aiken.

When the first round of bids failed to produce a viable option, the city raised the budget to $110,000 and postponed some desired features. FBG was the winning bidder, and a contract was signed on 16 May 1905 for $109,375. This would become a highly disputed figure when, almost a year later, cost overruns led to a dispute between FBG, which had submitted its bid on the cost-plus-fixed-sum basis, and the city, which had insisted upon a fixed-cost contract and refused to pay some $15,000 in excess costs.

The hospital was finished and declared completed on February 19, 1906, with the city and MSSC in charge of the construction crews, and with an announced cost of some $125,000. MSSC filed suit against FBG over the excess payment demanded. The matter would drag on until November, 1913, at which point a final ruling was made against FBG, who was judged to have exceeded the fixed cost of $109,375 and awarded no further payment.

FBG never mentioned the Roper Hospital project again in comments, advertising or literature until the 1909 Sweet's ad, which shows signs of being composed by someone less than familiar with the company's history.

Roper Hospital, the city of Charleston and the MSSC, for their part, never again mentioned Frank Gilbreth as having anything to do with the hospital project, even in long society historical writings. Even Edna Yost simply refers to this protracted battle as “continuing legal troubles.”

A new facility, first known as Roper Palmetto Pavilion, was built adjacent to this, Roper II. The old hospital was taken out of service in 1959, then torn down in 1967 for a multi-level parking structure. Roper III, with considerable expansion over the years, and the parking facility both still stand. Old Roper, the first hospital whose salvageable center had been converted to apartments after the 1886 earthquake, was badly damaged in 1980's Hurricane Hugo and finally demolished. 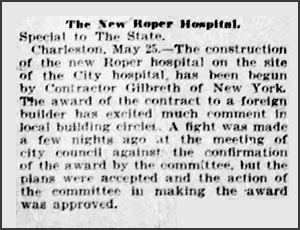 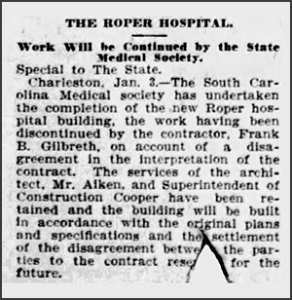 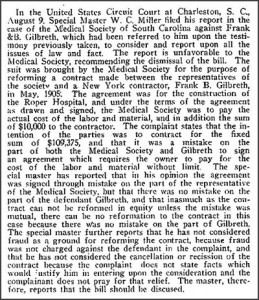 It was my pleasure to pass this tale to Dr. Edward Gilbreth, who is a grandson of Frank Bunker Gilbreth Sr, son of Frank Jr, a practicing physician in Charleston and on the board of the Courier-Post Publishing Company. He was unaware of his grandfather's involvement in the local institution of Roper Hospital, and wrote a column about the matter, noted above.