The Engineering Record ad of 7 Jan 1905 lists one job as simply “Seven-story Dormitory at Cambridge, Mass.” Extensive research turned up no matches (and managed to miss one obvious candidate by description). I tentatively assigned this to the Brimmer Chambers, which although in Boston was both seven stories and described in era vernacular as a “dormitory” for bachelors.

Assistance from the Cambridge Historical Commission helped straighten out two things: first, that “dormitory” in the era usually meant housing for students but more importantly could mean a privately owned building (not one owned or operated by the university, as is almost universal today); that is, what we would call apartments, whether for “bachelors” or students.

CHC historian Charles Sullivan then located Ridgely Hall, a 7-story (privately owned) dormitory that still stands at 65 Mt. Auburn Street in much its original form and use. Articles from 1904 detail its construction and dates. However, the building was “built by” owner Isaac McLean, with credit only to the architect George S.R. McLean, presumably a relative. Sullivan notes that Isaac McLean was known as a builder, but one specializing in interior finish who likely subcontracted all other work, including primary construction and masonry.

Ridgely Hall is almost certainly FBG's “Seven-story Dormitory” but no confirmation of their role can be located (and honestly, if CHC doesn't have it, it's not likely to be found).

I am including this project in the master list simply because it makes the total 100. I am leaving the entry out of the main numbering sequence, though, until and in the hopes that a letter, a journal note, something in Gilbreth archives turns up to confirm the connection. 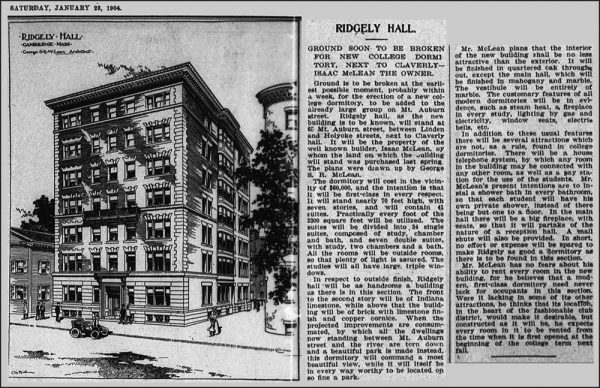