Frank Gilbreth purchased a defunct quarry in Weymouth, south of Boston, where for several years he quarried an unusual form of granite. It was stained in pinkish hues by iron deposits, and could be cut either end-face or “seam face” for a striking look. It may also have been suited to oblong and angular cuts for quoins and keystones. He may have acquired adjacent quarries to expand his output. 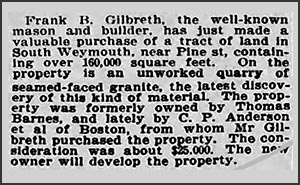 A Gilbreth advertisement of about 1896 notes that a project known as Lanesborough Gables (misspelled by Edna Yost as Janesborough) in Roxbury used granite from the quarries. The American Architect and Building News of January 25, 1896 notes that the project, at Humboldt and Walnut Avenues, is “six houses of three apartments of brick and half timber with foundations of Weymouth seam-faced granite from Gilbreth quarries.” 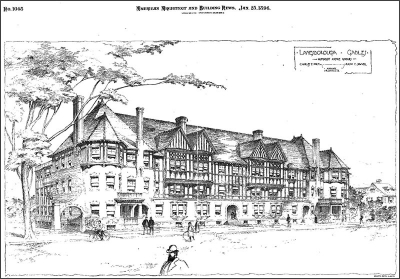 The building still stands, much as built but with the original half-timbered uppers refaced in clapboard. The pinkish granite foundation is still prominent in places; explore the street view here:

The church to the left of the building appears to have been built from the same stone as well.

Many other buildings were built using Weymouth granite. One example is the Unitarian Church of Winchester, MA, which can be seen in this street view:

More research is needed on the company, the granite and its uses in regional architecture.