This project was a large powerhouse for a newly consolidated “street railway” or trolley system with a line running from Brockton to Plymouth, MA. It was located on the shore of Plymouth Bay, “a stone's throw” from Plymouth Rock. Maps indicate it must have loomed over the historic site.

The history of the company and this power station is a mix of copious, precise detail and ambiguity. The railway and its new power station were written up in lavish detail by a trade magazine in April, 1902, but without a single clear indication of the plant's construction date. In summary, Plymouth & Brockton was organized in 1899, consolidated with one or two existing street railways in 1900, and was in operation by July, 1900.

Trade notice indicate that piles were being driven in May 1900, and there is a call for carpenters in August. FBG ads claim the station was producing power “three months after commencing work.” Thi

It can only be assumed that the line was running on older power stations or leased power from general electrical providers until the new Plymouth power station and one subsidiary one (at Bryantville) were built. Records of the railway firm give solid figures for coal consumption (per kWh produced) in the fiscal year ending September, 1901.

Confusing the timeline is a trade notice noting the massive 450- or 500-horsepower engine was being built in early May, 1901. Photos in the full-scale article a year later show it installed. (It is further noted as a “cross compound condensing engine” with a “Tangye frame”; Tangye was a British manufacturer of steam engines whose cast-iron frames set the standard for such design.) This may have been an additional engine, as the photo of the engine room seems to show a smaller unit in the background.

In attempting to resolve all of this, it would seem that FBG began the project in early May and completed it (or at least had the station up and running) by August, perhaps with finish or expansion work still needing those carpenters.

The powerplant has long been demolished, date unknown. However, the “Plymouth & Brockton St Railway” survives as a private, fixed-run bus service in much the same area. 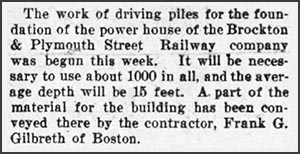 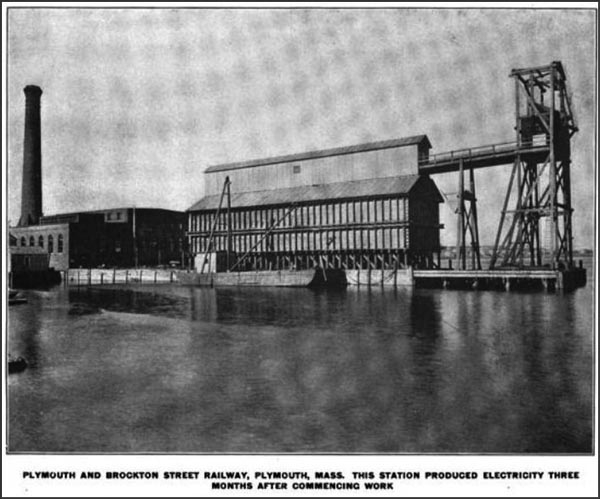 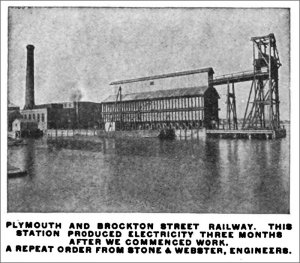 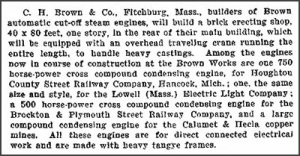 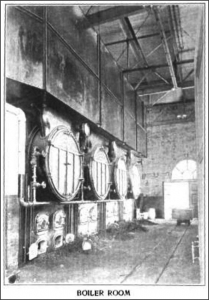