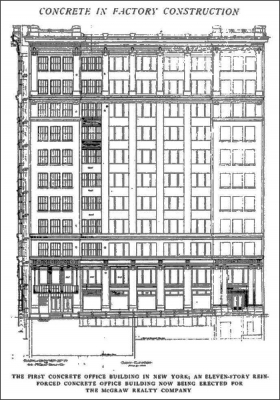 This project should have been a signature victory for FBG but instead turned into a bitter contract dispute, with the building completed from ground level by FBG's crews under the supervision of the building owner.

The story of this project is long and complex and was covered in detail in my CHJ paper. This content will be limited to a summary of the history and issues, as with Roper Hospital.

In early 1906, James McGraw set out to build a new building for his publishing empire, anchored by engineering and construction journal Engineering Record. He chose a Manhattan site in what is now the Garment District and with considerable effort decided to make it of reinforced concrete. It would be the first RC building in Manhattan, sometimes qualified as the first large such building. It also greatly pushed the envelope of the city's building code, with the engineers using fewer, slimmer columns to support each floor, less than half that demanded by existing “mill construction” framing and brick curtain walls. Other builders in the city, the US and around the world were watching closely, as it meant a revolution in building design made possible by the greater strength of reinforced concrete columns and floors. It was to hold printing presses in the basement, McGraw Publishing on the first four floors, and tenant office space on the remaining floors.

FBG was well known to McGraw, and references to the company projects and Frank Gilbreth appeared frequently in its issues of the prior years. So it is no surprise that FBG, especially its concrete subsidiary Underwriter's Engineering, was selected to erect this landmark building, and with trademark speed.

McGraw Publishing, the client and owner of record, and their engineer originally designed the building as eight stories, then nine, then ten with an eye on yet one more floor. These continuing changes would prove to be the project's undoing. By _, the foundations were complete to ground level but McGraw was complaining about the slow progress and mounting costs. That the added cost was created largely by increasingly grand redesigns and not by FBG's actions seemed to elude McGraw. That progress had halted at ground level because no one on the design side had remembered to apply for a building permit also seemed to be a surprise. Frank Gilbreth assured McGraw that his crews would proceed with all speed once the permit was in hand, and that RC construction would proceed at a very rapid pace once started. Stacks of pre-bent reinforcements and other materials were ready to go, as was the enormous four-boom derrick that would be jumped from floor to floor as the building rose.

McGraw, for whatever reasons, declined to take Frank Gilbreth's word and reputation on the matter. First, he published a long editorial about the faults of the cost-plus contract system, which was answered a few weeks later by another very distinguished builder who called the practice corrupt, “taking candy from babies [owners].” The contract with FBG, Underwriter's and the engineers was cancelled in November, 1906; McGraw exercised his right to take over the crews and equipment, and managed the building to completion in May 1907.

Frank Gilbreth sued McGraw, an action both Lillian and Edna Yost describe as unwise. Unlike the protracted loss with Roper, he would win a significant judgment against McGraw within two years, but at the cost of damage to his reputation, FBG's and that of the cost-plus contract model.

Oddly, the McGraw Building would figure prominently in the 1908 Concrete System, with some thirty pages of photos and annotations about its construction, with early photos containing the usual FBG signage and the later ones, including the completion group photo, managing to evade the question of who actually erected the building. That the book was published by rival firm Engineering News, owned by James Hill, was another needle at McGraw. (McGraw and Hill would merge their firms a few years later, forming both the McGraw-Hill publishing titan and the merged industry journal Engineering News & Record, still published as ENR.)

The building was extended in 1911 to hold the new McGraw-Hill firm, then abandoned when they moved to their famous green Art Deco building a few streets north in 1932. It still stands, holding mostly small garment-trade firms. 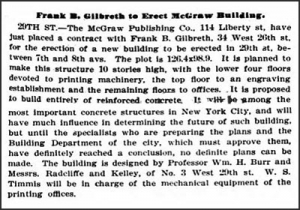 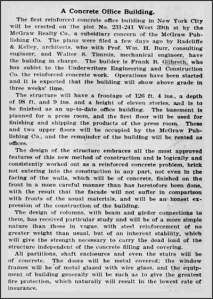 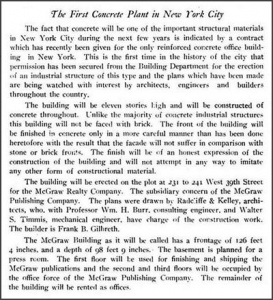 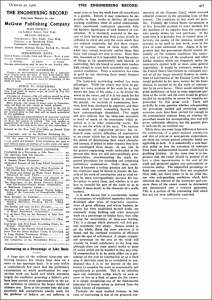 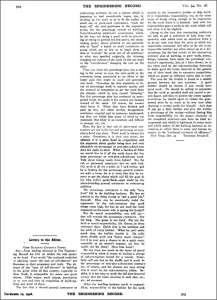 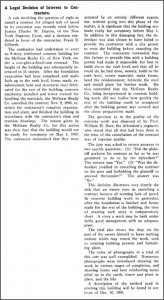 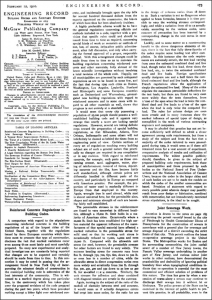 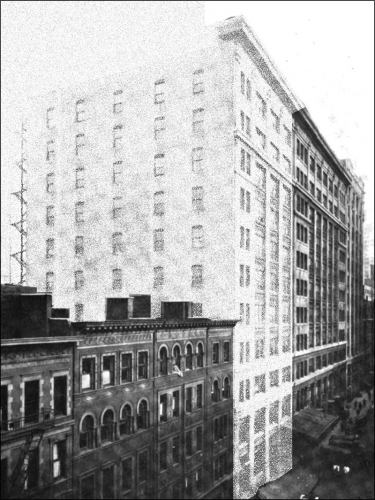