This project is known from a number of trade notices and is described as a 1-story brick addition to a cotton mill, for a cotton and silk ribbon and shoelace maker. (Later notices mention typewriter ribbons as well.)

A 15 Jul 1908 notice has the transfer of a deed and a one year mortgage for $3,750 mortgage to Danner and his wife, for a large “irregular” parcel at Fourth and River Streets in Paterson. The intersection is now a 5-way connection leaving a triangular area to the south, and the area is mix of old industrial, old homes and some new industrial/commercial. A one-story brick building of about the right age with an irregular shape exists in the triangle, but is much too small to be the 100×100 FBG project. One notice confirms this as the location of the mill, although Danner must have owned an adjoining parcel for the existing structures.

A July contract notice says “work is to commence at once and be finished in six weeks,” which seems to have been optimistic. A notice in September also says construction is to begin immediately and that the project “has been in contemplation for some time.” (Danner's plans were likely stalled by the slow recovery from the Panic of 1907, as were those of many businesses.) Although FBG seems to have been given the contract in July, a final notice from a textile journal notes “construction work has been started” in its December issue.

One notice adds an unlikely zero to the project cost.

Harry E. Danner was secretary of the National Association of Finishers of Cotton Fabrics in this era.

This may have led to the only other job in Paterson, the Wrubel apartment building in 1910. 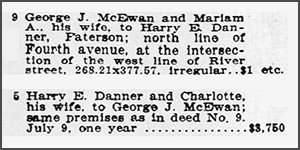