This project is known only from three short notices that FBG had been awarded the contract. No corroborating information has been found, and the notices may be erroneous.

No references have been found to “a new plant” for the company in this era, but a number of notices were found that indicate the company enlarged its power station in 1907 to provide power to a street railway and the town. Another notice indicates that a reservoir was enlarged in 1906.

A troubling notice from March, 1907 indicates that the only building or improvements recorded for the company that year were given to another contractor.

Especially as all three notices read identically and appeared at essentially the same time, with no further references found, it is entirely possible that the announcement was premature or that FBG declined the contract; this would be the era that F.W. Buzzell was complaining of being over-stretched with Frank Gilbreth occupied in California. 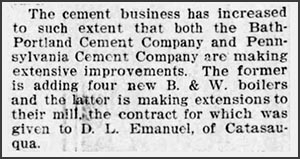