BACK TO TOP ▲
PAGE UNDER DEVELOPMENT !

Around 1900, a remote bend of the St. Croix River, the border between eastern Maine and Canada, was identified as an ideal location for a paper mill.

Paper mills need two things: an endless supply of logs to be processed into pulp, and an endless supply of water to enable the process. Maine, Vermont and New Hampshire were rich in both resources, and Maine in particular became dotted with paper mills, many of which are still in operation after well over a century.

(Click on any photo to open a larger version in a second window.) 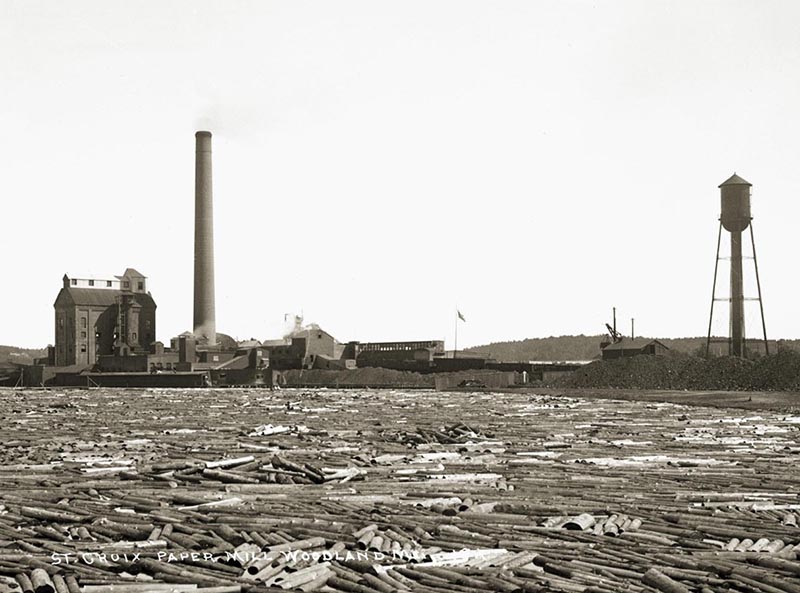 The St. Croix paper mill, about 1910, looking across the mill pond towards the mill buildings. (Courtesy Penobscot Marine Museum)

Timber logs are huge and heavy, especially from old-growth forest, and difficult to transport for any distance. A river that can be used to float them downstream to the mill is an asset; the longer and larger the river through timber country, the more so. A mill pond, the larger the better, to hold the incoming logs and allow relatively easy storage and handling, is a necessity. The St. Croix is a big river running for hundreds of miles up Maine and New Brunswick timber country. A consortium of businessmen identified what was then known as Sprague's Falls, near an island on the Canadian side, as an ideal location to build a dam, which would create a gigantic mill pond and allow power generation for the mill. After some delay, the St. Croix Paper Company was formed, and in early 1905 they settled on Frank B. Gilbreth to build the entire plant.

Frank Gilbreth had by then built a ten-year reputation as one of the fastest, most efficient builders of commercial buildings, as well as dams, wharves, warehouses and powerplants. His namesake firm's ability to turn a swathe of largely uninhabited Maine back country into a thundering paper mill, complete with a worker town, in the shortest possible time was one reason he was selected. The other was his willingness, even insistence, on doing so under the innovative cost-plus-fixed-sum contract. 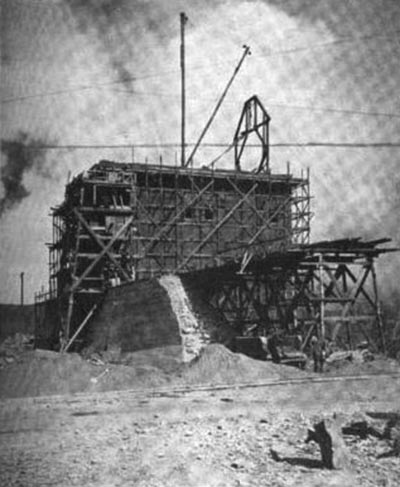 The digester house and dam, under construction, 1905 (From Engineering Record)

Most large projects of the time were still done under a simple lump-sum payment, in which all costs were determined and the contractor bid the job based on that plus his labor costs and profit. The drawback to lump-sum contracts, for any but smaller projects, was that every last detail had to be worked out beforehand so that an accurate cost estimate could be determined. Otherwise the builder or owner or both risked a complex, messy cost difference that could compromise the entire project. Cost-plus allowed a savvy builder to get started on the known and necessary elements of a job while the other details were still being planned, designed and costed out. The difference in contracts could mean a year or more's time in project completion.

The remoteness of the construction site was a special challenge that only an experienced and motivated contractor could overcome. At the time the contract was signed in February 1905, the only structure near Sprague's Falls was said to be a signpost, with the nearest house two miles away. Every worker, tool, sack of concrete, brick and nail would need to be brought in, with Bangor more than fifty miles away and the only good route around the coast and up the St Croix itself.

Gilbreth, in characteristic form, had workers on the site within the month. Besides logistics, eight feet of snow on the ground was the first hurdle. The workers built cabins and workshops on top of the snowpack, then spent months chocking and leveling the buildings as the snow melted, until they rested on the ground. 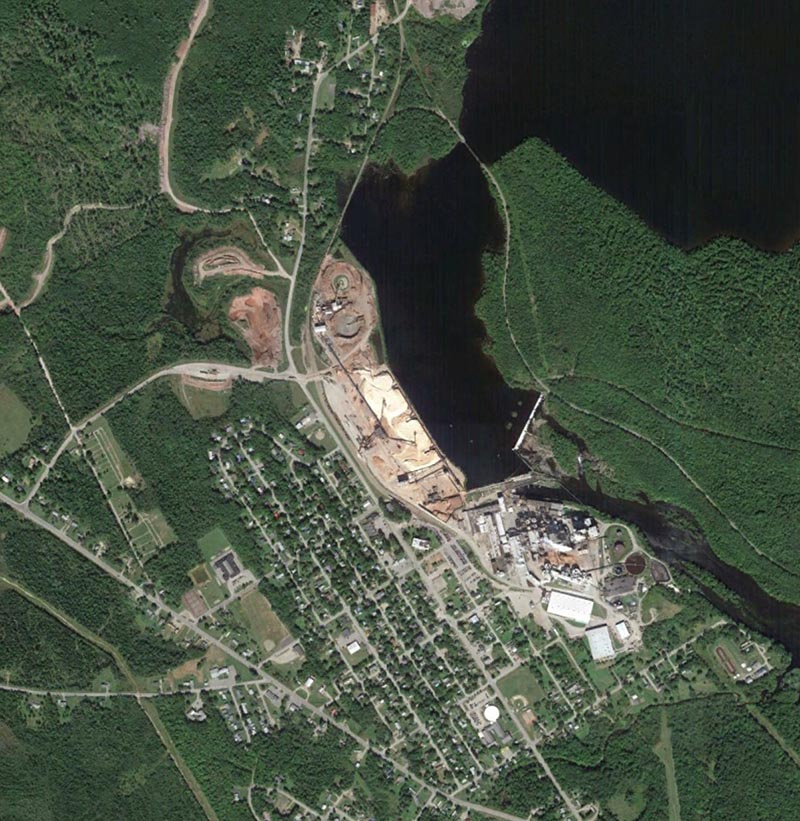 Woodland, Maine, today, with mill, dam and millpond, center. About one quarter of the larger pond or “flow” is at top right. (Google Earth)

Over a thousand workers, many of them new Italian immigrants, laid brick, poured concrete, excavated and built nonstop. A nearly two-thousand-foot zig-zag dam, running from the mill site on the American side past the island and to the Canadian shore, erased the falls from the map and created an immense holding pond of nearly one-and-a-half square miles. Turbines in the dam produced power for the later construction and then for the mill and town itself. Construction of the dam involved delicate organization to comply with Canadian law and customs regulations. There had to be control of workers going back and forth (probably with special attention to the immigrants), a specified proportion of materials needed to be purchased on the Canadian side and such details as separate horse teams were needed to comply with Canadian law, which prohibited feeding and bedding horses used on the American side.

At the mill site, Gilbreth's crew built a 75-ton ground pulp mill, a 70-ton sulfite mill and a two-machine 75-ton newsprint mill, along with all the supporting structures and machinery needed: a powerplant, chimney, wood preparation rooms, blowpits, digesters, acid plant, boilers and more. They also built a worker town with paved streets and room for up to 2,500 people.

The mill was in operation by early 1906, and was expanded by 1910, and became one of Frank Gilbreth's most celebrated construction projects. He would leave the construction business in 1912, after seventeen years of large-scale "speed building" all over the northeastern US and elsewhere, and become far better known as an efficiency expert. 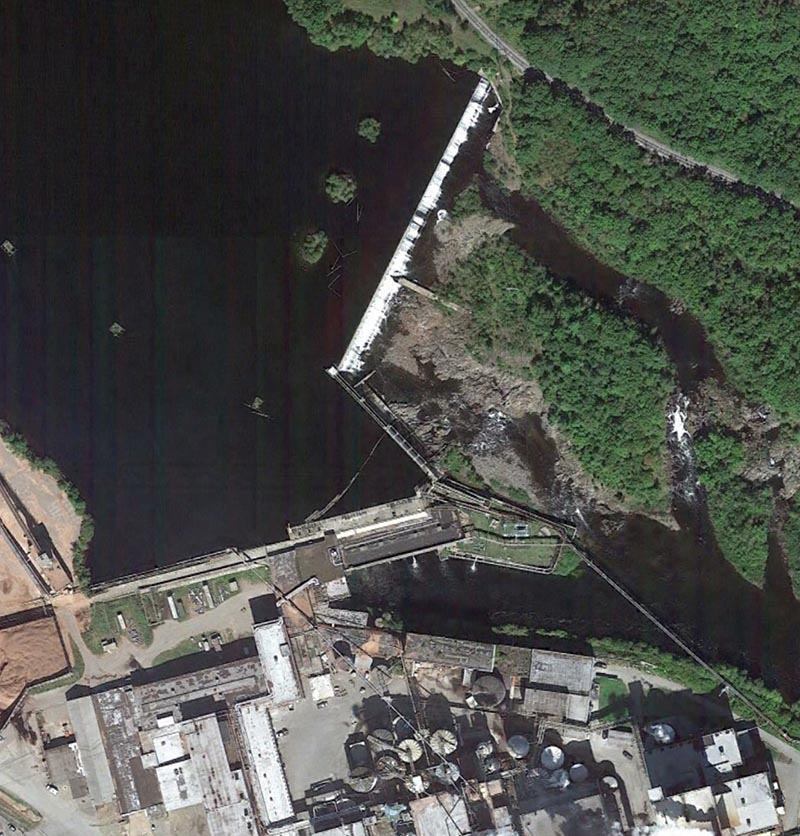 The St. Croix mill is still in operation some 115 years later. Most of the original mill is now owned by Georgia-Pacific, and two other mills stand nearby. The dam and power plant remain much as they were constructed, and a few of the orignal buildings even exist.

The town, still called Sprague's Falls in most contemporary accounts of the mill's construction and early days, became known as Woodland; a nearby town or village may have been known as Baileyville. With the actual falls lost to the dam, the name Sprague's Falls has been erased from both maps and memory. (Another set of falls with that name are near Cherryfield, Maine.) The name Woodland became disputed in the 1990s, when it was shared with another town in Maine against state law. Woodland in Aroostook County was dubbed the rightful owner of the name, as the older, and Woodland né Sprague's Falls of Washington County changed its name to Baileyville. The actual town area within Baileyville Township is still the "designated village" of Woodland.

The town, of whatever name, has seen the hard times and shrinkage of dozens of northeastern mill and factory towns, and gamely holds on at about half its peak population of 2,500. Its website bravely makes the case for living and bringing business there. It still has schools and a town hall, but when I contacted the Woodland Library—still listed in state directories and with a long-defunct Facebook page—I found it had been permanently closed in 2014.

But the mills remain, and the town remains, and Mr. Gilbreth's tremendous dam remains. 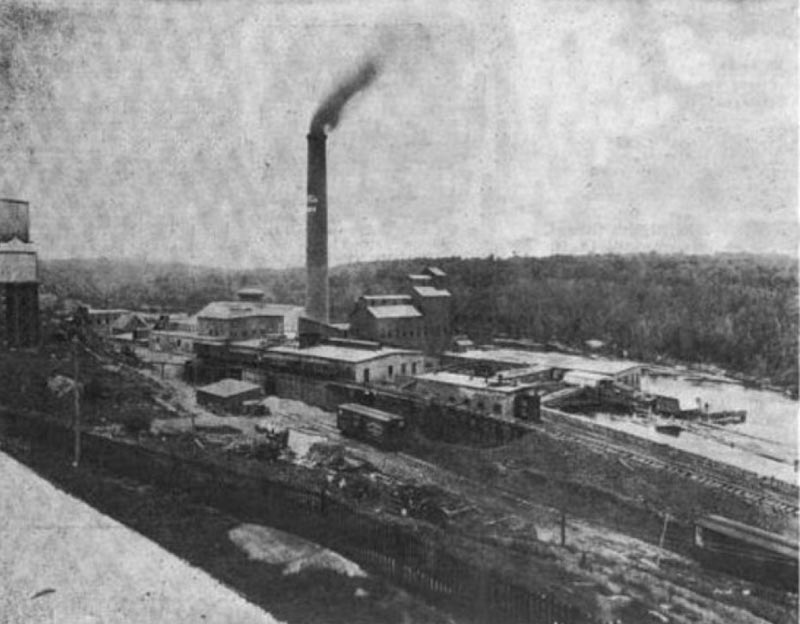 The buildings built by Gilbreth at Piercefield, about 1906. The dam and mill are to the left. (from Engineering News)

Piercefield, NY today. Other than foundations, the mill buildings are entirely gone from the empty area at upper left, but the dam, pumphouse and about 32 houses remain. (Google Earth)

At about the same time Frank B. Gilbreth built the installation at Sprague's Falls, the company built another complete mill town in upstate New York.

A mill for the International Paper Company was built on a bend of the Raquette River—possibly by another contractor—and Gilbreth built a number of adjunct buidings including a storehouse, office building, power house, chimney, stable and 32 houses to form the new town of Piercefield, New York.

The history of the town and mill, which may have later been converted to a lumber mill, are not recorded, but the tiny town still stands, as does the adjacent dam. The mill buildings have long since vanished. 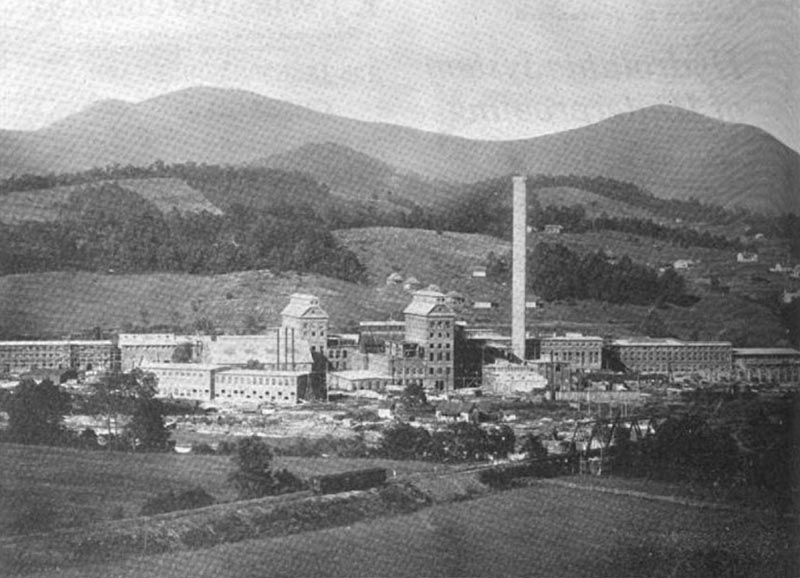 The Champion paper mill as completed, about December 1907. (from Manufactuer's Record) 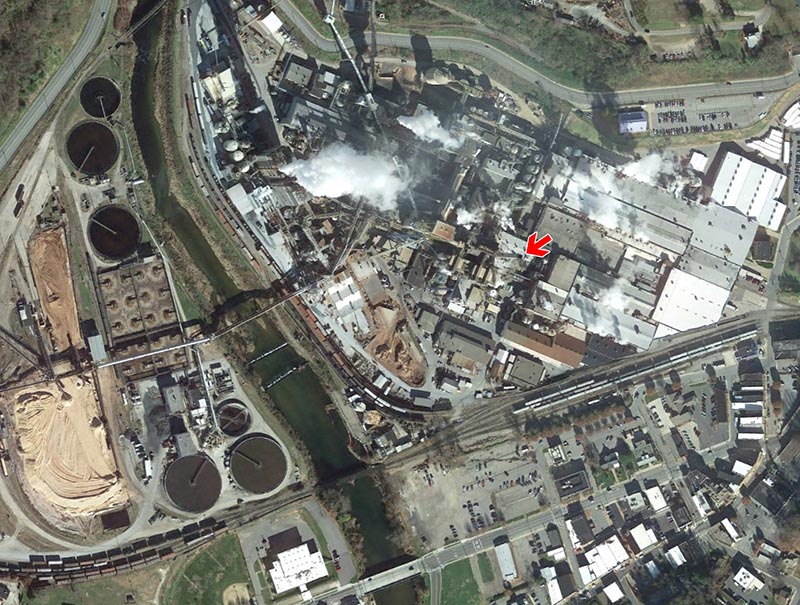 Canton, NC today. Although most of the oirignal buildings have been replaced, the original concrete chimney remains (arrow). (Google Earth)

Two years later, Frank B. Gilbreth did it again, and much larger. From a contract signed in early 1907, the firm built an enormous paper mill in North Carolina that began operation by the end of the year.

Champion Fibre Company, later Champion International Paper, wanted a mill at a spot on the Pigeon River occupied by the tiny town of Canton, North Carolina (which was named after Canton, Ohio, the source of the steel used in the bridge across the river). In less than a year, Gilbreth built some thirty-five buildings—one of the largest paper mills of its day. The cost-plus contract for some two million dollars in construction again allowed work to begin while the details of the project were still being developed.

The soft bottom land required pilings to support the mill buildings: some forty miles of pilings, nearly ten thousand in all, were driven by local, Irish and Italian work crews.

The mill changed owners several times, including an era of employee ownership, but still stands and produces paper and cardboard for Evergreen Packaging. Only a few of the original buildings remain, but among them is the original 250-foot cast-concrete chimney.