Overall, this is meant to be a pretty serious website, a comprehensive successor to a series of informational and community sites that have come and gone and mostly limited themselves to information about the Gilbreths as it's presented in the family lore books.

(How boring, though, right?)

So for the casual fans, the readers of the books and those who remember the Gilbreths as much as childhood friends as any historical figures, here's some plain old fun stuff.

Ten Things You Probably Didn't Know About The Gilbreths

If you've only read the family lore books, Cheaper by the Dozen and maybe Belles on Their Toes, you probably don't know a number of details (some sad and inappropriate for those cheerful books) about the family. Here's a few surprises:

The last child, Jane, was only two years old when Frank Gilbreth died. Thus, the many stories in Cheaper by the Dozen that involve all twelve children are, well, fictionalized a little.

2) There weren't ever twelve children.

The sad truth, omitted in Cheaper and mentioned only in a footnote in Belles, is that the second daughter, Mary, died at age five from diphtheria. There were thus only eleven surviving children in all. That Frank, Lillian and the children old enough to understand always kept Mary in their hearts made the “Dozen” complete, though.

3) The family only lived in the famous Montclair house for four and a half years before Frank died.

Many of the stories in the two “family lore” books imply that the huge Montclair house was the setting of events. Most happened elsewhere, as the family lived in Plainfield, New Jersey and then Providence, Rhode Island before Montclair.

4) “Foolish Carriage” was not the only car the family owned.

Although Frank Jr says the famous Pierce-Arrow was “our first car,” Frank Sr had owned many cars in his life, including while the family was growing. The vast seven-passenger touring car, with nine seats in all, was probably the first car the entire family—all of it, all the way to Jane—could fit in at once. It earned the notion of being a “foolish extravagance” because it was about ten times as expensive of most cars of the era.

By the way, “Foolish Carriage” was a 1918 Pierce-Arrow 48-B-5, with a very sophisticated 4-valve engine and a top speed of over 75 miles per hour. They are very rare now, with fewer than ten examples remaining. The Gilbreth car is not believed to be among the survivors.

Although the family lore books mention Grandma Martha as a sometime visitor and occasional babysitter, the truth is that she lived with Frank his entire life, from Maine to the boardinghouse in Boston through all the family homes. It was not until she died in 1920, when Frank was 52, that he (and the entire family) lived without her.

Her sister, Aunt Caroline “Kit” Bunker, also lived with them until her premature death in 1907. Lillian thus had to contend with not just a live-in mother-in-law, but something of a spare one as well.

6) Tom Grieves was a real person.

The Irish handyman and later cook, so humorously presented in the family lore books and seemingly fictional or perhaps a composite of multiple people, was quite real and lived with the family for well over twenty years. He had a son who was raised by his brother and sister-in-law, his wife having died before the boy was a year old.

7) Mrs. Cunningham was a real person.

Although she is reduced to a few walk-on appearances and never given a first name in the family-written books, Annie Cunningham was also a real person who lived with the family for over ten years. Besides being the cook, she and some of her older daughters served as family help, nurses to the babies and infants and even helped deliver one of the Dozen.

8) The family only owned the Nantucket summer home “The Shoe” for six years before Frank's death.

Again, the family lore books speak of summers on Nantucket and at “The Shoe” as an eternal thing, but the family may never have visited the island before the property was purchased in summer 1918. They thus had only six summers there before Frank's passing. It still remains in the family, although the tiny cottage was replaced with a much larger beach house some years ago. (The two small lighthouses still flank it, though.)

9) The “Therbligs” were unknown to the world until after Frank's death.

One of the most memorable passages in Cheaper is the discussion of the motion-study elements the therbligs (which is Gilbreth spelled backwards, more or less). However, their specific form was not presented to the field or the public until shortly after Frank's death. The name was meant to be something of a copyright trap in case anyone else tried to claim the idea.

10) The Montclair house was named “Mostulab.”

Frank loved to name things with short, catchy nicknames derived from his working terms. When they bought the Montclair house in 1919, he christened it “Mostulab” — short for “Motion Studies Laboratory” — but the clumsy name was rarely used.

Ten Things Hardly ANYONE Knows About the Gilbreths

There are yet more things that aren't widely known about the lives of the Gilbreth family and their various activities. Here's some more “curious and forgotten lore”...

1) There were actually thirteen children in all.

In 1915, Lillian had a late-term miscarriage. It may have remained unknown to any but the adults in the family (Frank, Lillian and Martha) until many years later. The daughter they lost is buried in a common church grave for infants in Providence, Rhode Island.

2) Frank and Lillian spent more than ten years in a titanic battle over their professional field.

In 1907, Frank became a devoted follower of the first efficiency expert, Frederick W. Taylor. Within a few years, the differences between the men's interpretation of how labor efficiency should be applied grew into friction. Even after Taylor's death in 1915, his close circle of associates worked to minimize the reputation of the Gilbreths and the acceptance of their methods. Lillian spent much of her solo career countering the challenges of Taylor's followers and restoring Frank to his proper recognition.

3) Tom Grieves and Mrs. Cunningham co-habitated for over twelve years.

It was not until a series of interviews and oral histories given by Ernestine, late in her life, that it became widely known that the household help, Tom Grieves and Annie Cunningham, shared quarters in both the Providence and Montclair houses. In fact, Tom was only hired because he came with the highly-recommended cook; in the end, though, it was Tom who remained with the family until his death. Why they did not marry is unknown... but maybe understandable.

4) The original owner of the Montclair house died in an exceedingly odd way.

The original English owner and builder of the famous Montclair house was killed just a few years later when one of his pet deer, panicked by a nearby brush fire, gored him to death.

5) Only one of the five daughters had a career outside the home.

Despite the influence of their famous parents and their mother who was highly educated and a professional far before such things were common, only Ernestine had a career other than homemaker, working for Macy's and another department store as a buyer for about fifteen years. (And then writing five more books besides the two co-authored with Frank Jr.)

Despite the odds, the expense and the setbacks including losing Frank's income when only two of the children had reached adulthood, all eleven graduated from college, all married for life, all had at least two children and all but one lived long lives—many of the Dozen reached their eighties and nineties. (The fine print: Frank Jr would remarry after the death of his first wife; Martha died of cancer at just 59; and one of the sons would divorce after thirty years.)

7) Lillian's youngest aunt became a doctor at 38 and a psychoanalyst who studied under Freud.

The other “Dr. Lillian” also divorced her first husband in 1902, remarried quickly only by going to another state, and kept a Westchester mansion full of squirrels... about whom she made six short live-action movies.

8) Frank's younger cousin was one of the first women dentists, and the first graduated woman orthodontist.

Jane Bunker was the first woman to graduate from the first school of orthodontia. (Two women associated with the school are considered to predate her as orthodontists, though.) She was also Frank's first serious intended, until Martha issued a strict "No cousins!” rule. (The marriage would have been permitted in Massachusetts.)

9) Frank's sisters were both extremely accomplished.

Frank's two sisters were extremely accomplished women well ahead of their era as well. Anne studied music with Franz Liszt, and Mary was a skilled botanist whose collection is still part of that held by Harvard.

10) Frank and his family had no contact with the Gilbreth side of the family.

Although both the Bunkers (mother's side) and Gilbreths (father' side) were very large, well-established Maine families, Frank and his descendants had no contact with any of the Gilbreth family beyond Frank's older sister Anne. Frank Jr noted in 1970 that he'd grown up with all the Gilbreths he knew — his siblings, his Aunt Anne and all their children. The reason for the divide is loosely connected to the loss of the family fortune, but few details are known.

If you loved the description of therbligs in Cheaper by the Dozen, you'll find this amusing.

If you want to know the details of what they mean and how they're used, I can't do better than David Ferguson's essay, which you'll find over here.

Presented for your amusement. Please do not reproduce this image (on posters, t-shirts etc.) without specific permission. Please share it around the web only with the credit line intact. Thanks! 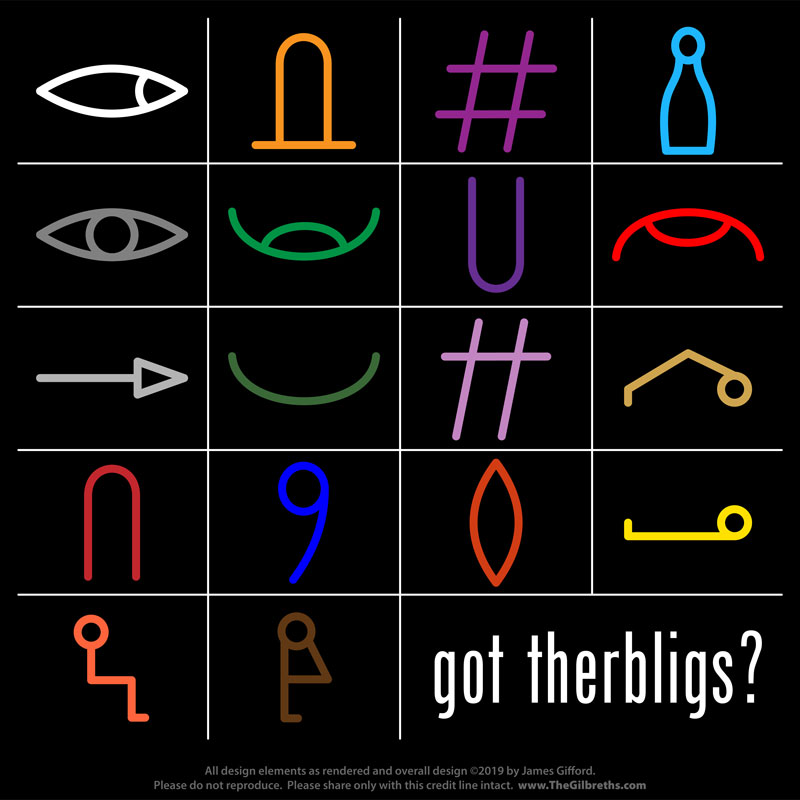 ( I don't claim anything about the symbols or names as my own, but this rendering of the images comes from a significant amount of my own work and is explicitly not placed in the public domain. )