This project is mentioned in a 1906 letter of commendation but is otherwise unidentified. A construction chart of late 1907 gives considerable information on three Y&T buildings, only one noted as a 1905 project. (Another building of 1901 is assigned to another builder. The remaining two by FBG were built in 1907 and not included in the chart.)

This may have been the large forge and foundry building of “1906” mentioned in company histories, as the otherwise complete American Machinist chart (see appendix entry) does not list any comparable alternative.

Unknown. Many former Y&T buildings stand but it is not certain which may have been FBG projects. 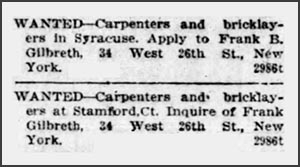