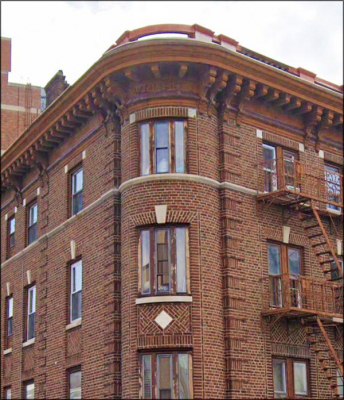 This project was a surprise discovery, a 4-story apartment building in Paterson, NJ, not far from where the Gilbreths lived in Plainfield—one of several very local and late projects for FBG.

Isaac Wrubel (1869-1915) was an immigrant who settled in Middletown, CT in 1899 and operated a department store there for many years. Besides being an anchor businessman whose family ran the department store for several generations, from his death until 1964, Wrubel was the father of Elias Paul “Allie” Wrubel (1905-1973), a Tin Pan Alley and Hollywood composer of some note.

It is not clear why a Middletown, CT magnate chose to build an apartment building, or anything else, in Paterson, NJ. A 1907 notice indicates a partnership with two Paterson businessmen, but clips from the year of actual construction, 1910, do not mention them and have different construction details. (The building also carries a terra-cotta WRUBEL plaque at the top of its street corner.) The number of apartments also varies with the notice, from 64 to 40 to an apparent final total of 48. (One notice has the confusing phrase “three houses of forty apartments,” which if not an editing error seems to mean three more or less independent groups of about 12-15 apartments each.)

The first floor is now partially commercial and the current number of apartments is believed to be 33.

In any event, this was probably the last significant brick building built by Frank Gilbreth, and it represents a masterwork of the mason's art. Close examination in Google Street View will show stunningly complex brick patterns and color usage, along with the terra-cotta owner's plaque. 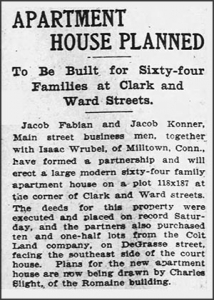 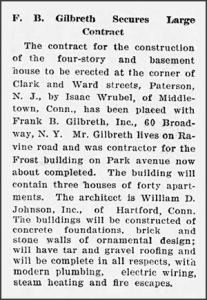 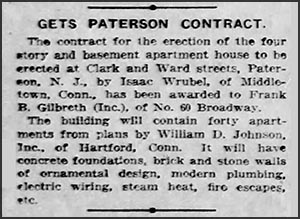 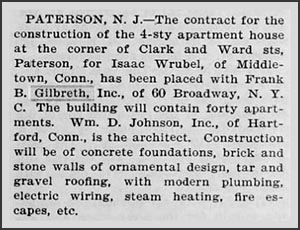 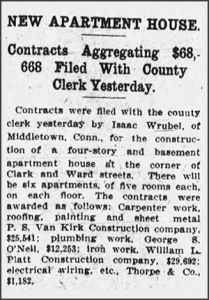