This was an unusual project for FBG in that it was in the deep south, was more focused on extensive deep dredging than construction and was left uncompleted for complex reasons. It has no parallel with any other FBG project.

Details are incomplete, but the job was dredging of a sixteen-to-eighteen mile barge canal between sulfur production works at Sulphur, Louisiana and the Gulf of Mexico, and possibly some construction of locks, gates and docks as well. The project was begun and there are photos of giant dredge barges at work. However, the effort was halted by spring (noted by Yost as “the sudden cessation of another [job],” that added to FBG's financial woes.)

What apparently transpired was that Union Sulphur Co was having a battle over rail transport rates for their product from its remote location to a useful shipping point, and decided to dredge and use their own barge canal instead. When the rate issue was resolved, the canal was halted. Research finds mentions of it remaining uncompleted in 1927–31.

In the early years of WWII, some 35 years later, the critical need for sulfur led to the Army Corps of Engineers completing the dredging so that full-scale barges could move more of the material. There are notes of Union Sulphur planning smaller barges for use until maximum-size ones could be put into service.

In any case, FBG did not complete this project, although at least one ad specifically claims they did. This and the very late Grand Falls dam project are the only projects left unfinished by FBG (although note that the McGraw Building and possibly Roper Hospital were completed by another contractor).

The canal still exists, but is cut by cross-fill at a number of points for roads, so it is now a series of long sloughs rather than a working canal. It runs east-west, oddly enough, from where the Union Sulphur Works were (a region now filled with other mining and petroleum facilities) to the Sabine River to the west. The Sabine itself is enlarged in several passages until it is of a size for barge traffic, through Sabine Lake, to the Gulf, near Port Arthur, Texas. It is not clear why Union Sulphur took this extremely long route compared to the 4-5 miles to Lake Charles, which already had barge-scale connections to the Gulf. A study of the history of the era and when canals were dug and extended would probably provide an answer. It may have been as simple as right-of-way.

UPDATE: The 1908 Moody's article linked below was just found, and pleasantly confirms nearly all my careful guesses about the history of this project. It claims FBG was paid in full for the project despite Union Sulphur having them abandon it.

UPDATE: The presence of what are evidently Army Corps of Engineers is explained in the Moody's and Motor Boat articles; it would seem that FBG called on the US government to survey their path to the start of dredging and possibly the route of the canal, since it probably lies on public lands or rights-of-way. That both articles specify the canal length to the absurdly precise sixteen and one-fifth miles speaks to the presence of master surveyors.

Canal still exists but is cut into long sections by cross-fill. 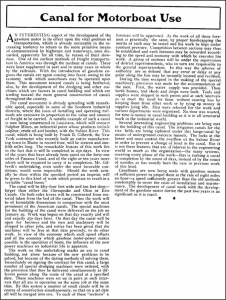 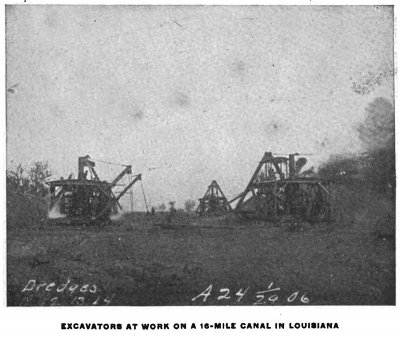 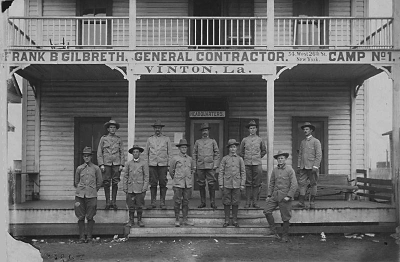 Long after I had pieced together the elements and history of this project from scraps — everything above, pinky swear! — I stumbled on a long article that told the tale from beginning to end and confirmed nearly my ‘informed guesses.’ It's these small moments of validation that sustain a dreary research effort. The Motor Boat article above was found shortly after this one and adds some interesting technical details.