This was one of FBG's signature accomplishments, a complete mill, dam, powerhouse and mill town from essentially raw land, completed in about nine months despite remoteness, weather and international issues.

The contract called for a 1600-foot dam, mill, adjunct buildings and 32 worker houses at Sprague's Falls on the St. Croix River, the eastern border between Maine and New Brunswick, Canada. The newly formed paper company had selected this location for its primary mill. It was essentially uninhabited (perhaps 100 people within a few mile radius), about fifty miles from the river's mouth at the southern edge of Maine, and about eighty miles from the nearest town of any size, Bangor.

Construction began with eight feet of snow on the ground—twelve, in some promotional writings—and worker cabins had to be built atop the snowpack, then continually chocked and leveled as the snow melted. Construction of the dam had to be coordinated from the Canadian side, with operations under Canadian regulation for things like horse team care and stabling.

The goal was machinery installation by October 1st. The mill was in operation by January, 1906.

The mill is still in operation as Woodland Pulp. The town, with the namesake falls erased by the dam, became first Woodland, then because of a peculiarity of Maine law, was forced to change its name to another local designation, Baileyville. A chipping mill was built in 1997, and a tissue mill was added in recent years, employing a good part of town's 1,000-1,500 residents.

The dam, claimed in some promotional literature to be 1,900 or 2,000 feet long, can be seen and accurately measured at 1,600 feet on Google Earth. 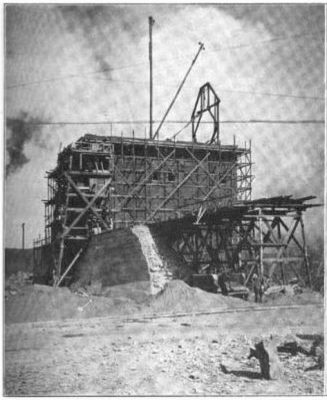 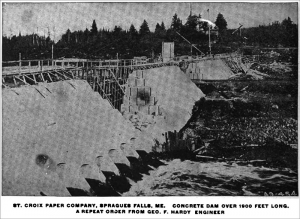 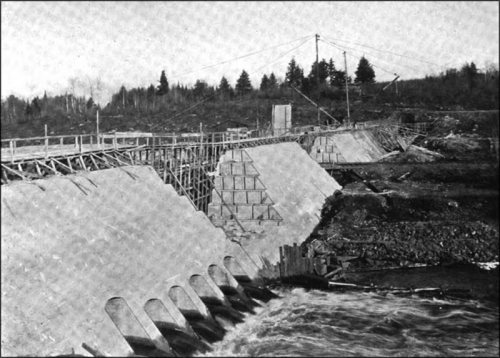 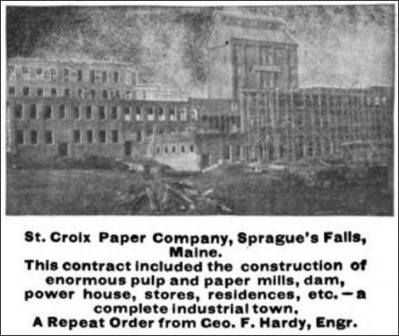 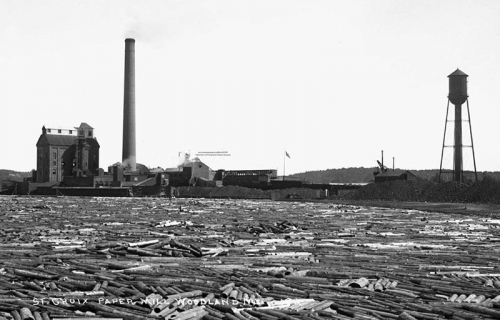