On April 18, 1906, San Francisco was hit with one of the most famous, deadly and devastating disasters in US history: a 7.8 or larger earthquake that leveled the city and damaged nearly every other smaller city around the Bay. Fires from many sources including broken illuminating-gas pipes started from at least 50 points and raged for four days, completing the destruction of the city. Causing well over 3,000 fatalities, it remains the largest non-weather-related disaster in US history, exceeded only by approximate counts in three protracted weather disasters, and exceeds even the death toll from the 9/11 attacks by at least a few hundred. (The next earthquake death toll on the US list is around 200; the count for the 1906 event greatly exceeds all other earthquake-related deaths combined.)

Frank Gilbreth was on the ground in California month later and his initial intent to acquire as much reconstruction work as possible turned into a plan to remain there, relocating his business center and family to San Francisco or Oakland (where Lillian's wealthy family still lived and had considerable civic and social power). He was eyeing the West Coast, from Los Angeles to the Bay Area to the Pacific Northwest, and even Alaska, as fertile ground for expansion while JW Buzzell and others ran the East Coast operations. 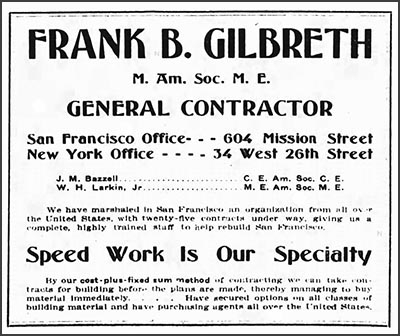 It was not to be; his inability to find a solid foothold amid many larger and better-established firms already in the region, as well as the severe economic downturn of the Panic of 1907, sent him back to the eastern half of the US by the end of 1908. The nine projects in San Francisco and power station in Seattle would be his only projects west of Iowa/Louisiana.