This project was a new building for what was then known as the Normal School of Physical Education, run by physical fitness advocate and Yale M.D. D.A. Sargent. Sargent held several posts in Cambridge, including director of the Hemenway Gymnasium at Harvard, assistant professor of physical training at Harvard, and director of this school, which in 1916 became the Sargent School for Physical Education. This was a “normal” school for training teachers, with a focus on Sargent's advanced notions of what physical education and training should be.

There is considerable confusion about this building, sometimes identified as the Hemenway Gymnasium itself. The confusion probably comes from Sargent's myriad posts and that a letter published in an FBG ad is headlined Hemenway/Harvard, a somewhat inappropriate mixing of Sargent's positions. In both the 1905 notice and the 1909 Sweet's ad, the job is identified as both a gymnasium (which the facility may well have included). The latter also uses the later name of the school, which must have been in partial or casual use in advance of the formal renaming some seven years later. Whoever composed the ad may have been misled by the institution on Sargent's letter, or perhaps the “confusion” was deliberate to take on the shine of the more prestigious school.

This project is positively identified by a 1905 FBG ad as a new building for the Normal School. Notes from a Cambridge Historical Commission historian confirm it was built at 6 Everett Street with a permit issued in May, 1904. Some notices claim it was built on the site of the former Jarvis Field House. A 1903 map seems to show both buildings at the corner of Everett and Massachusetts Streets, where the Harvard Co-op now stands; the contradictions of date and location need to be resolved. 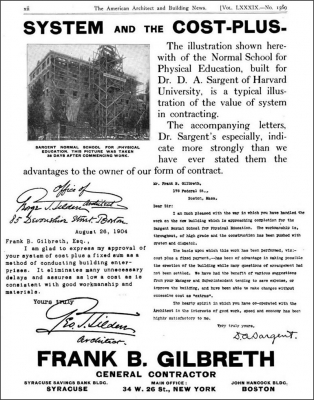 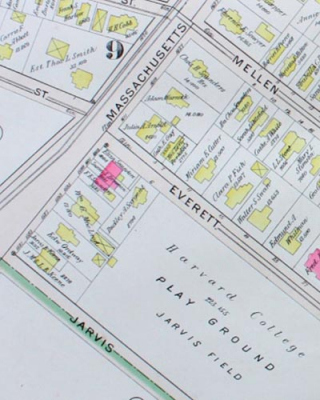