This would be the last known project built under FBG supervision. Although the Glen Falls project for the same company was contracted later and is thus technically the last FBG job, it was finished some six months or more ahead of this one. This is the only other completed FBG project outside the continental US, the other being the Lowney factory in Montréal. (The Grand Falls power station was also wholly within Canada, but never completed; the Sprague's Falls paper mill dam was built from both sides of the St. Croix River.)

The reason for the delay between the contract in September 1910 and the beginning of construction well into 1911 is not know, but may have been a simple waiting-out of winter weather.

The contract notices, which appeared in several standard journals with identical wording and in the same issue week, is unusual in noting that the contract is with “Frank B. Gilbreth, Incorporated.” It is not known if this is a mistake, a misunderstanding or whether Frank Gilbreth included his last construction projects under the new business created for management consulting, Frank B. Gilbreth Inc. (Lillian changed it to “Gilbreth Inc.” after Frank's death.)

This project is significant as well in that Frank Gilbreth and a number of Taylor associates made an excursion from a major meeting up to see this project, possibly (according to the Taylor Society obituary, which is not necessarily trustworthy) in October 1910. The obituary puts Frank Gilbreth's comment that there should be a society devoted to Taylor's ideas during this jaunt. 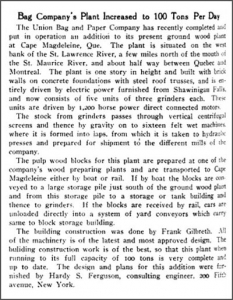