This project was a 5-story office building (6 stories in some accounts) plus basement, with a brick, iron and stone front, steam heat and two elevators, at the southeast corner of Baltimore and Hanover streets

Most notices say the job is for one James Piper, but a more detailed clip makes it clear that the principals were Dr. Jackson Piper and his children James (later James Sr) and Adaline. James Piper Sr. (1874-1965) was a young attorney and research shows several law firms called the Piper Building home. Piper had a distinguished 60-year career in Baltimore.

The building no longer exists and little additional information has been located.

A somewhat peculiar notice of offices to let in the building, with FBG listed as agent, ran for some time across the late summer and fall. An example is included below. 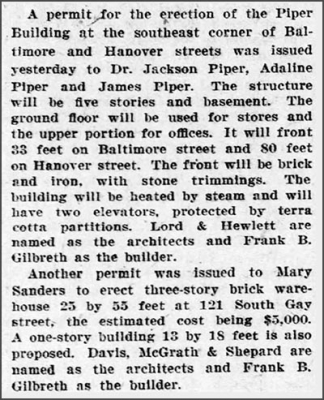 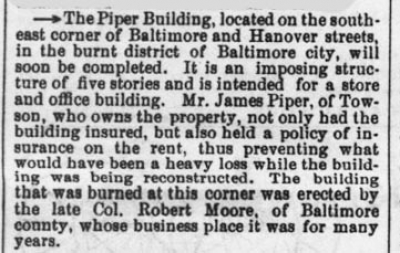