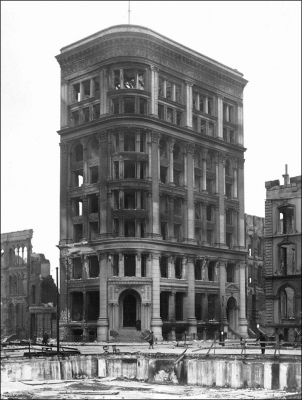 This project in the aftermath of the San Francisco earthquake and fire was one of FBG's most unusual, and led to a great deal of publicity and attention for Frank Gilbreth as an innovator and expert.

The Mutual Life Insurance of New York company owned the building at the southeast corner of Sansome and California and occupied most of the upper floors, with the Canadian Bank of Commerce occupying the basement and first floor. By all accounts, the earthquake did minimal damage to the steel-framed 7-story stone and brick building… but there were only hours to make that judgment, as the following fire completely gutted the building. (Something that appears to have been true for most of the destruction; thousands of buildings that might have been salvageable after the quake were burned to the ground.)

The building, as shown at right, was left gutted but standing and largely structurally intact. Mutual Life finally decided to demolish the badly damaged upper floors and rebuild on top of the lower two. FBG was hired to do the demolition based on their very low bid for the work, and they removed the upper floors over a period of three months, while the Canadian Bank of Commerce continued its business in the ground floor and basement.

Exactly what rebuilding was done after the demoltion, and the configuration of the building between 1907 and 1919, has not been determined. It is also not clear if FBG did the reconstruction. The only clues that they did are Edna Yost's cryptic reference to “the Canadian Commerce Building” as one of the San Francisco project, in a separate description from the demolition of the “Mutual Life Insurance building,” and that no other contractor or note of construction has been found.

The building continued to be used by the Mutual Life Insurance company, with another bank as tenant in the ground floors, until the rebuilt structure was demolished in 1919 to rebuild the space with the 15-story Balfour Building, which still stands.

Frank Gilbreth took the Mutual Life Building job (the part for demolition, at least) on an extremely low bid of cost plus $2,000, to ensure he'd get the contract. He, and many other builder/engineers, wanted to get their hands on the structure to see how it had survived the double disaster when other buildings had crumbled. He became something of a celebrity, writing a definitive article that was republished in many places, and speaking on the topic for the remainder of his building career.

The Canadian Bank of Commerce

The role of the Canadian Bank of Commerce in these events is both well-documented and frustratingly hard to sort out, from Edna Yost's cryptic note that one of Frank's jobs in SF was the “Canadian Commerce Building” and extending to the uncertainty of where they finally set up new offices.

The building left after FBG's demolition-in-place was rebuilt to an unknown extent and remained until 1919. It was then razed and a new building, known as the Balfour Building, built in its place. This building still stands. 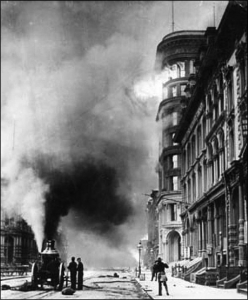 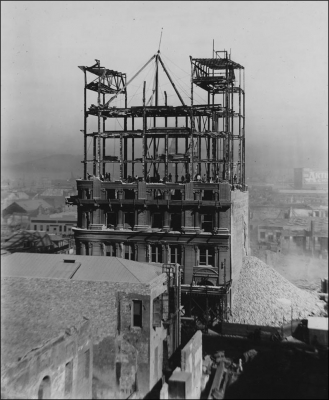 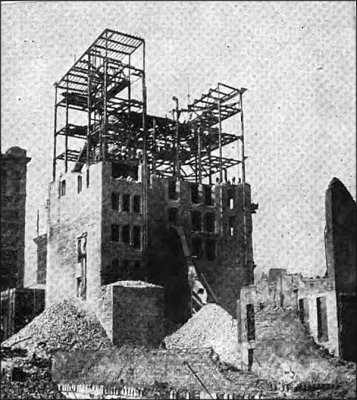 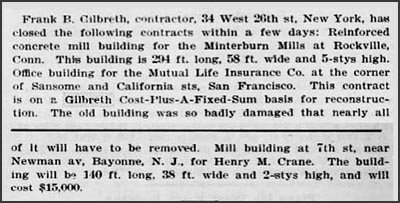 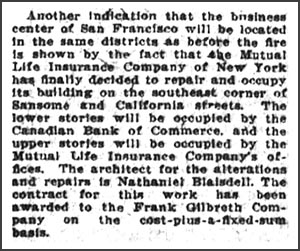