This project was a hospital for the workers and families of Moses Taylor's coal, iron and railroad companies.

The donor and namesake, Moses Taylor, was a 19th century industrialist who bought a controlling interest in the Delaware, Lackawanna & Western railroad.after it went through financial difficulties in 1857. The shares grew from $5 to $240 and made Taylor, already wealthy, immensely so. Although he had no history of philanthropy or largesse towards his many thousands of iron, coal and railroad employees, upon his death in 1882 he left $250,000 (about $6.5M in current worth) to build a hospital for his workers and their families.

There is some confusion over the actual location of this project, as the largest and most notable hospital of this name was founded and remains in Scranton, PA. Research indicates that a number of “Moses Taylor Hospitals” were built across the territory of Taylor's holdings, especially the railroad. This project, identified in four contemporary contract notices, appears to have been a small (140×43 foot) facility built at 370 Ridge Road in what was then West Seneca, NY.

A contemporary guide to local Buffalo hospitals from 1932 notes that it was a 29-bed institution, quite small even for the day, specializing in industrial injuries. If it remains in operation, it is not under the Taylor name and not at that location. What would be 370 Ridge Road is now within a city park, adjacent to a major run of railroad tracks. 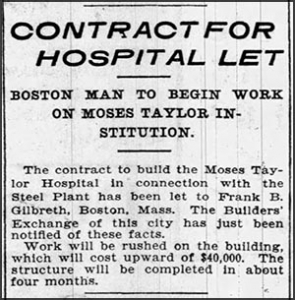