This project was another chance discovery while sifting for information on the Frost Building. It was a long fishing pier of reinforced concrete, built for New Jersey notable (and later state senator, following his brother) Hamilton Fish Kean, at his Sandy Hook summer house. This would rival the 1904 auto garage in Boston for the smallest known FBG project.

The available notices are contradictory and cannot be resolved except that they appear to refer to two different but nearly identical projects. One of these piers was apparently built in early 1910, with FBG's name well-documented. The second appears to have been built in late 1911, by another, unnamed contractor and likely at another location on Sandy Hook. Clearly, H.F. Kean really was an avid, and wealthy, fisherman.

Unknown. Probably demolished as no piers remain on the ocean side of the Sandy Hook spit. Many exist on the inlet side but there is no identification of where Kean's cottage—either of them, if the supposition above is accurate—stood.

These three clips are believed to be correct and refer to an FBG project. Note that both men's middle initials are wrong in the first two, and that the writer cites only the business address, seemingly unaware that Frank Gilbreth was by then a long time Plainfield resident: 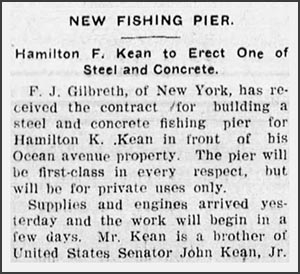 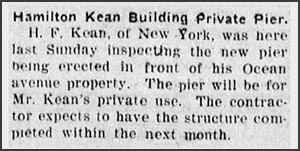 These two clips are completely anomalous in date and must refer to yet another concrete pier Kean had installed, perhaps at a second property on Sandy Hook: 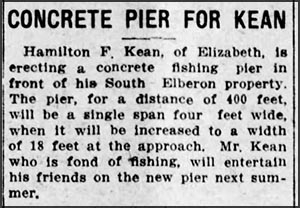 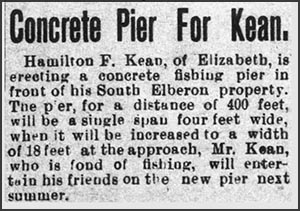 This clip is simply included for context: