This project was a 6-story factory, office building and storefront at the corner of Chestnut and Clifford Streets, built for the jewelry firm of Irons & Russell. It was the first, or one of the first buildings in what became Providence's Jewelry District, filled with similar jewelry manufactures and wholesalers. A wraparound storefront, originally for two stores, may have sold to the public as well as resale jewelers. Some notices describe the building as 5 stories, probably on the “five stories plus ground floor” model.

The building was raised on the site of the second Home for Aged Men founded by Henry J. Steere and Lucy Bucklin. A vast new third home was built in 1895 and this converted dwelling (and possibly others) at Chestnut and Clifford were razed as part of the construction contract. It was the first all-electric building in Providence and used an innovative heating system that directed warm air onto the workers' tables.

The building still stands after extensive renovation ca. 2018 that appears to have included refacing or refurbishing of the two street faces.(Original brick facings on the parking lot and far side are much more weathered, appropriate to the building's age.) The original birdcage elevator was fully restored but is not regularly used due to code issues. The building contains storefront businesses, jewelry manufacturers, offices and loft condos.

Despite much civic attention, current use and registry on the National Register resulting in extensive documentation and recognition of the architects, the only reference to FBG construction is one notice in Engineering News. No corroborating record has yet found. 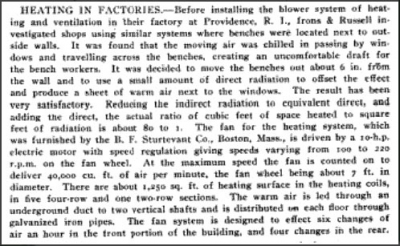 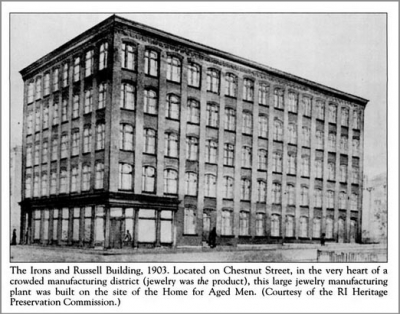