One of the nine projects in San Francisco following the earthquake and fire of 14 Apr 1906, this was two large warehouses for city notable Timothy L. Hopkins.

A major notice of 5 Aug 1906 says the warehouses are to be 275 feet square, with one built of reinforced concrete and the other of brick, of three stories with a design to support expansion to six floors.

The location varies slightly with notice: always Townsend Street, possibly north side, but “between Fifth and Sixth,” or “between Sixth and Seventh,” or “near Seventh.”

There is one reinforced concrete warehouse at the northeast corner of Townsend and Fifth that is three stories high and 275 feet wide, but it appears to be a later reconstruction. 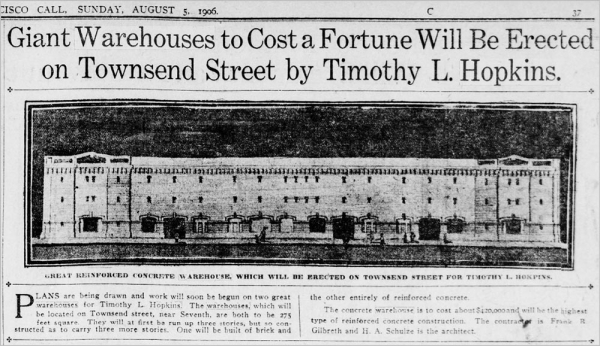