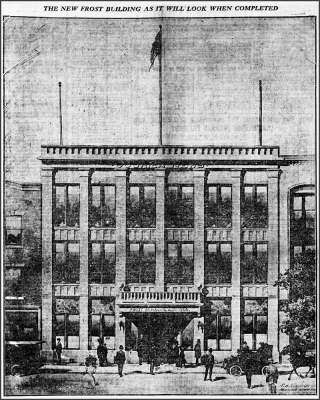 This project was a second-level chance discovery (made while researching the Wrubel bullding, itself a chance find). It seems to be the only building FBG constructed in Plainfield, NJ—and while the family was resident there, yet—and it is still in use. It bears the newspaper name across its top cornice, and the building name on the portico.

On 1909, the Plainfield News-Courier had outgrown its existing offices, and decided to build itself a fine new building. The reinforced-concrete building was announced as, and is still prominently nameplated, the Frost Building, after the then-President of the Courier-News Publishing Company, George H. Frost. (Frost was also president of Engineering News Publishing, soon to be sold to James Hill, as well.) The basement was for the presses, the first floor for the newspaper offices, the second floor for “the Frost estate” and the third floor to be subdivided as needed for tenants.

How local son Frank Gilbreth came to be chosen as the builder is not clearly recorded, but multiple stories on this and other construction projects make note that he is “a resident, on Ravine Road”—the location of the house the family leased in Plainfield from 1909 to 1912. Ads for subcontractors are interesting in giving a portrait of how FBG sought and selected local contractors for electrical, plumbing, finish work and the like (something also noted for the Wrubel building.) 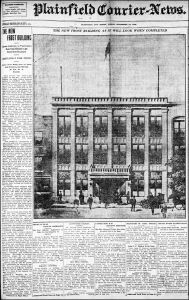 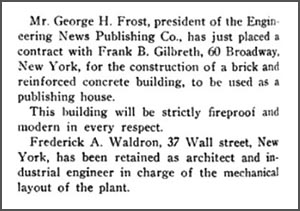 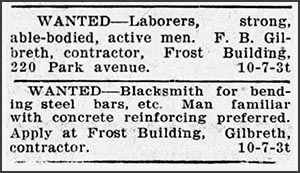 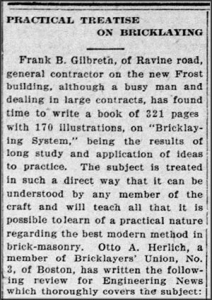 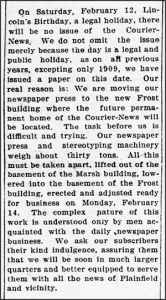