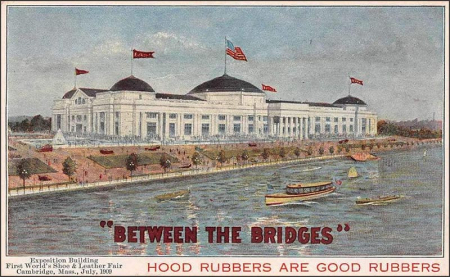 This project is unique among FBG's in that they were not the original contractor, but took over to fix bungled construction and complete the project as quickly as possible.

In 1906 or so, a Boston shoe magnate made plans to hold the “First World Shoe & Leather Fair,” an exposition for that trade, in June 1908. The idea expanded into holding such expositions annually, which led to the idea of a dedicated building that could hold the event and be rented out for other purposes the rest of each year. After some investigation and a mild bidding war between the cities, the proposed site was moved from a tentative location in Boston across the river to Cambridge.

Contractors Woodbury & Leighton began work in mid-1907 on the soggy shore of the Charles River, but work was halted by December when it was discovered they were not following good practices, building code or the architect's specifications for the foundations. The conflict went on until a settlement was made that relieved Woodbury & Leighton of further obligations and a new contractor was found to take over the project: native Boston son Frank B. Gilbreth. A new target of June 1909 was set for the first exposition.

FBG began work in April, 1908 by repairing the faulty foundations, then raised the rest of the elaborate reinforced-concrete building by fall. The (somewhat delayed) Fair was held in June, 1909. Unfortunately, it was also the Last such; access problems related to bridge repairs limited traffic and the show was a financial failure. No second one was ever held.

The building was used for a succession of businesses including a car maker until it was demolished, in stages, with the final section taken down in the late 1940s. The MIT campus had been relocated next to it in 1916, and absorbed the space to build capacious apartments for student housing that still stand.

The exposition was the brainchild of one Oran McCormick, who in 1906 conceived the idea of an annual shoe and leather trade exposition similar to ones held in Europe. It was originally planned to be in Boston, but various civic support offers led to it being placed across the Charles River in Cambridge. It was further planned to construct a grand exposition hall through 1907 and hold the ”First World Shoe and Leather Exposition” for one week in July, 1908. Building troubles would delay that by one year.

Builders Woodbury & Leighton began the building on schedule, but were soon stopped by city inspectors for grievous faults in the construction of the footings, crucial on the soft riverbank land. Work stopped in December 1907 while the legal issues were resolved. Finally, a settlement was achieved that appeared to let W&L off the hook while requiring no further payments to them, and brought in FBG to correct and finish the construction. FBG would begin its work in April 1908, with the exposition pushed forward one year, to June 1909.

The exposition, despite its grand planning and buildup, was something of a failure to everyone but Cambridge and Boston city boosters. In part because traffic bottlenecks over the adjacent bridge made reaching Cambridge difficult, attendance was modest. The building and the expo consortium were in the hands of receivers by the end of the year.

The new owners (who were the original owners of the land) remodeled the building into two sections with a paved throughfare in its middle. The building was occupied over the years by auto makers, sellers, used car agencies, a few light industrial firms and even a cab company. Finally, the victim of deferred maintenance and the encroaching MIT campus, the exposition building was demolished in stages, the last in 1948. 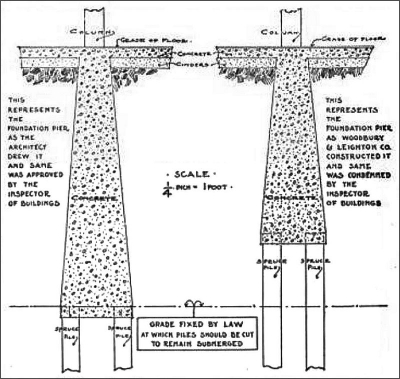 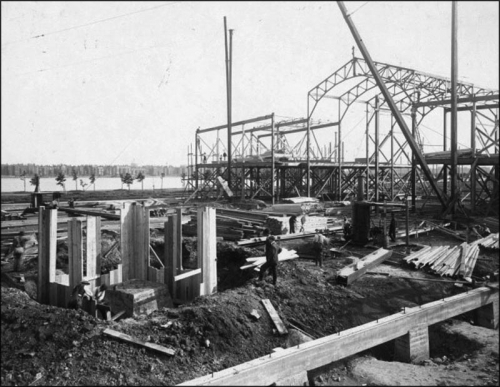 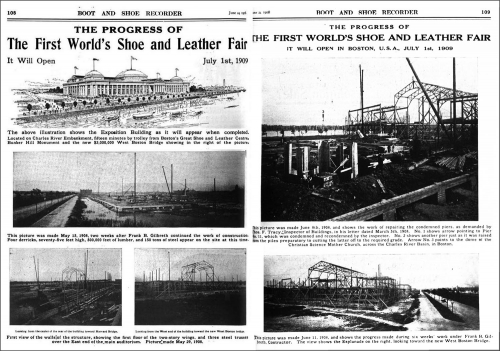 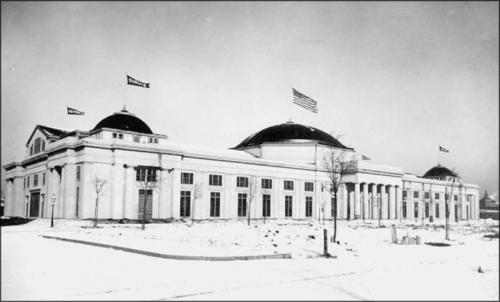 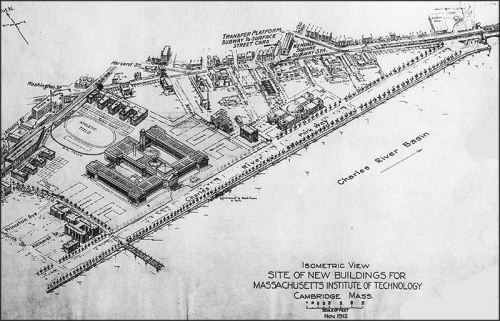