Tantalizing clues have been found for several jobs, some in the first years of Frank Gilbreth's solo career. These are often one or two brief calls for workers at a particular site not known to be the location of another, known project.

Rather than try to assign these projects a full entry, they will be grouped here until further data is located.

This project, the first known for FBG after its formation in April, 1895, is known only from a single call for carpenters for a job in Auburn, NY that appeared in the Buffalo Courier on 24 Jul 1895. (Unfortunately, this clip is no longer in my archives, and all attempts to locate it including a page-by-page scan of that issue and of all issues of all Buffalo papers of that period have failed. My associated notes are fairly detailed, but now unsupported.)

Farm Implements News, Vol. 16, no. 1 (January 1895) notes that the D.M. Osborne Co, a major maker of farm equipment and supplies, was planning to enlarge their new rope plant that year. Since further FBG work in Auburn was for similar firms Columbia Rope and Auburn Hame, that may be the job on which FBG participated.

This project is known only from two local notices. A number of more or less contemporary projects in the wealthy resort area can be found, including the one attached. The slight vagueness makes it possible that these notices were based on a bid or proposal that never came to fruition; compare with the immediacy and urgency of most other such job notices by FBG. 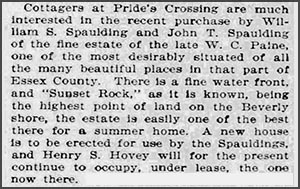 This project is known only from two local notices. The reference to a “power station” is tantalizing.

It is not clear if the following two clips are related to the FBG job. There are many confusing references to a “Hampton power station” related to a street railway in contemporary newspapers. 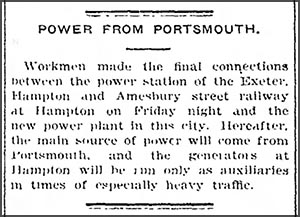 Fitchburg is just a few miles from Leominster, MA, where the Cluett, Peabody factory was built in 1902. FBG may have placed its headquarters and staging area for this project within Fitchburg.

It is perhaps worth noting that Fitchburg is the home of a company in which Frederick W. Taylor made one of his studies in development of Shop Management and other management writings, the Simonds Rolling Machine Co. Or not; there was much industry throughout the area and an FBG project, if there was one, could have been for any of it.

This project, a coal pocket, is known only from one local notice.

Notices in August 1903 indicate Frank Gilbreth bought a large tract of land along the Mystic River in Medford, MA, some six acres with 5-600 feet of river frontage. His intention was to move his machinery plant there from South Boston. This entire scenario is known from one short newspaper article and a few very short identical trade notices. It is not known where his Boston plant was located, whether he ever moved operations to Medford, and if — as seems likely — he himself erected the “several large brick buildings” for the enterprise. 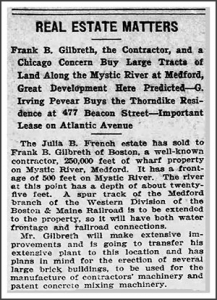 The org chart of FBG, published in a variety of places in August 1905, lists 18 jobs by job number, architect or engineer and location: 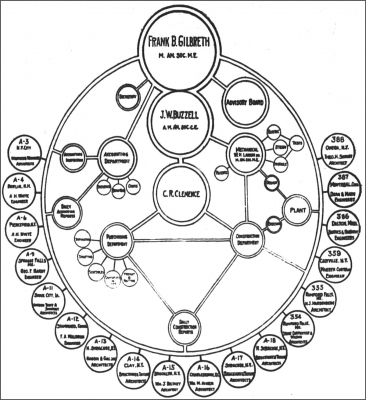 Sixteen of the jobs can be assigned to known projects. Two elude connection:

Numbers such as A-15, etc. can be seen on many FBG project photos and have been useful in matching the (sometimes generic) content with specific locations and projects; corresponding dates on photos can help refine the time frame of those projects as well.