The second and last Ransom hollow dam project by FBG, this one was announced for a new power company in northern Georgia, with a major mining consortium being the customer for the electrical power. It was announced as 42 feet high and 600 feet long (an amusing misprint in one notice has it at 6,000 feet). The dam was to be accompanied by a powerhouse suited for a 4,000 hp generator.

Unfortunately, only trade notices announcing the contract for this project have been located, and there is no confirmation that the dam and powerhouse were ever constructed. Both the Blue Ridge Power Co and the mining company for which the power was to be developed, Franklin Pyrites Co (also Franklin Pyrites & Power Co) have scant records. It is possible this project was planned and initiated, but the uncertainly of mining (in what was exhausted gold mine territory) caused the effort to collapse before it was executed.

Many research findings support this hteory. The Etowah is a fairly small river, making the claim of a 600-foot dam unusual, unless a considerable flood pond or lake was intended, and there is no sign of such a lake or record of one in the area. The town or location of Creighton, Georgia cannot be established except as “six miles east of Ball Ground” (a town that still exists), where the defunct Creighton gold mine was located. A supposed site of Melford Shoals cannot be identified. And there are reports a few years later of a large dam project that failed to come together, although it seems to be several miles to the west on the Etowah. All in all, this is probably a phantom project much like the Pennsylvania cement plant.

See the prior entry (dam for Warren County Power Co) for more background and information on Ransom dams and FBG's involvement with their construction.

Executed or not, this was FBG's last contract in the US South and only the fourth in all, the low number perhaps being a consequence of the still-unresolved legal troubles over Roper Hospital.

Unknown. May not have been built. 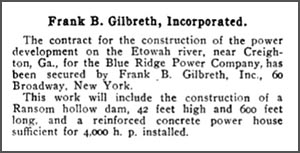