This project was a large, H-shaped 5-story dormitory, privately owned and operated but intended for Harvard students. (As with Prescott Hall, the modern term would be “student apartments” rather than dormitory, which we now assume to be university-built and -controlled.)

From the single construction notice, it is not clear if FBG was a masonry-only subcontractor or the “builder” in the sense of most of the firm's other projects. Even when FBG was the named contractor and builder, other firms were often subcontracted for plumbing, windows, interior finish etc. That a pair of names is listed in the construction article as “built by” may mean Thurston and White were the actual general contractors, or engineer/architects of the role for whom FBG exclusively worked on all projects. (That is, the firm was never directly employed by a building owner, but by the architect and/or engineer.)

Note also that the architect now credited with the striking building, which was renamed in her honor, is also reduced to someone who “drew up” the men's plans.

Until further information comes to light, this will be considered a masonry-only subcontract for FBG, one of the few known jobs where FBG was not the primary builder. There are probably many more in the early years, especially in the gap of 1899-1902.

There is considerable confusion over the name and identity of this building. Built as a dorm for Harvard under the name Craigie Hall, it became an apartment building known as the Craigie Arms early in the 20th Century. (Which is odd in itself, since Harvard seems to have shed few dorms of any vintage; perhaps this one, built as “affordable housing,” was beneath their standards.) It was then renamed the Chapman Arms (after the notable female architect), the name it holds today along with an informal retaining of Craigie Arms. It is currently a “mixed-use property” with 25 rent-controlled apartments, 25 market-rate apartments and some first-floor commercial tenants.

More than one resource confuses this building with a much larger Boston apartment complex of approximately the same era now known as the Craigie Arms, not to mention a home once Longfellow's, previously known as Craigie House. There are also Craigie Halls in Calgary and Glasgow, and possibly elsewhere.

On May 6, 1963, Beverly Samans, 25, was stabbed to death in a first-floor apartment, a crime attributed to the “Boston Strangler.” 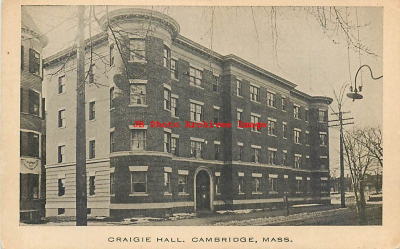 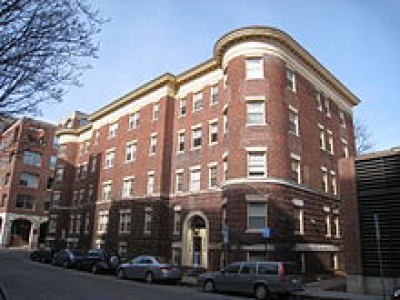