This project was a rebuild and expansion of a box-making plant destroyed in the third major fire of 1908 to hit Chelsea, MA. It consisted of six buildings and a powerhouse with two “very tall” chimneys: a receiving building 345 feet long, an office building, a 200-foot stable, a sawdust and kindling wood building, a 2-story factory of 350×200 feet and a warehouse of 375×68 feet.

Besides the scale of this project, it is noteworthy in that Frank Gilbreth successfully negotiated for the implementation of the Taylor System piecework pay rate that had failed the prior year in Gardner. It was thus his first successful implementation of a job management system. By his own account, he spent a grueling overnight session with four representatives, bolstering his arguments with his experience as a union laborer himself, to convince the unions to allow the pay system. Horace K. Hathaway was the sole Taylor consultant for this effort.

Chelsea was one of the cities beset with fires in the early years of the century. The “Great Chelsea Fire” of April, 1908 burned some 350 acres across a mile and a half of the city, taking with it over 2,800 buildings and 19 fatalities.

The September 21st fire of that year burned five acres in the largely wooden manufacturing district around the Atwood-McManus plant, with no fatalities. (A third fire, sometime that year between these two, is referenced in newspaper accounts without details.)

Atwood-McManus would lose some six million board feet of lumber along with its wooden facilities. However, the fire started in the Atwood-McManus plant, and is considered to have gotten out of control when the employees tried to stop the blaze themselves with one one-inch hose.

(In October 1973, what became known as the “Second Great Chelsea Fire” started within yards of the same point as the April 1908 blaze. It burned 18 acres/blocks and 200 buildings, with no fatalities.) 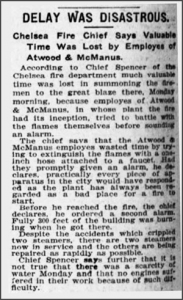 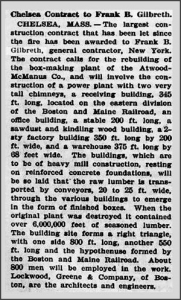 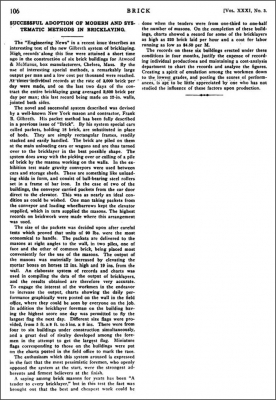