This 6-story brick apartment building (originally described as 7 stories; this likely included the basement) was built as a novel take on “bachelor's apartments,” with no central dining room but meals delivered to the residents. It stands at the corner of Pinckney and Brimmer Streets, largely as built.

An interesting detail of construction is noted in one clipping: the building rested on an “old” (in 1897) seawall that FBG had to test before being allowed to use it as part of the foundation.

The building was noted as “elegant” in 1900. It was converted to condominiums that now sell in the $500k-1M range. The original number of apartments is unknown but it presently has 33 units from studio to 3 bedroom. 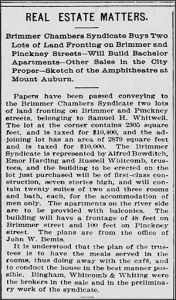 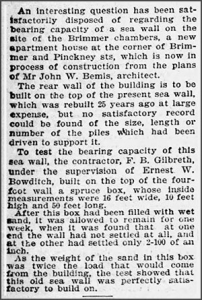 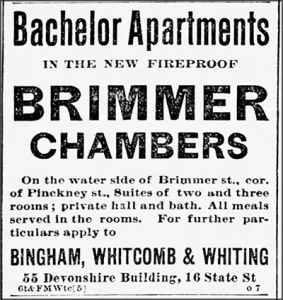