One of several jobs known from the listing in the FBG advertisement in the 1909 Sweet's Catalogue, this one was a 5-story reinforced concrete factory for S.L. Allen. Allen was primarily a maker of agricultural machinery, with the “Planet Jr” seeding machine their flagship product. To take up production slack during the summer, Allen developed and produced the Flexible Flyer snow sled.

Some notices and the site diagram from Concrete System indicate this was one large addition to the SL Allen plant, dominating the site at its completion. At least one notice indicates other, smaller buildings were part of the contract as well. At an unknown date (probably 1920 or so) a larger angular building that wraps around the concrete cube of the FBG project was built—somewhat oddly, of brick and iron construction.

An outlying building to the northwest (what appears to be the original foundry) burned around 2000 and was demolished in stages between 2011 and 2016. Another massive fire apparently burned one the larger buildings in 2009, but there are few signs of lasting damage.

It is worth viewing the whole site using Google Maps, as the larger brick building still contains signs for the company and its two flagship products. 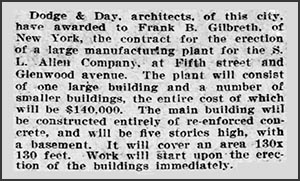 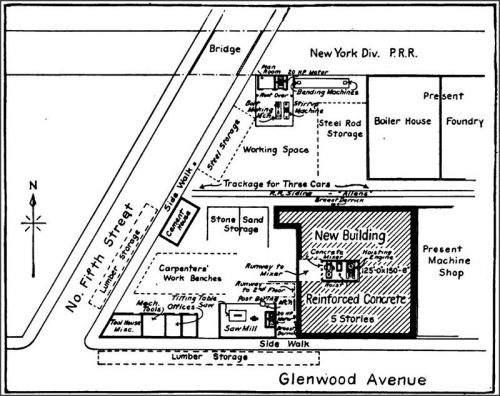